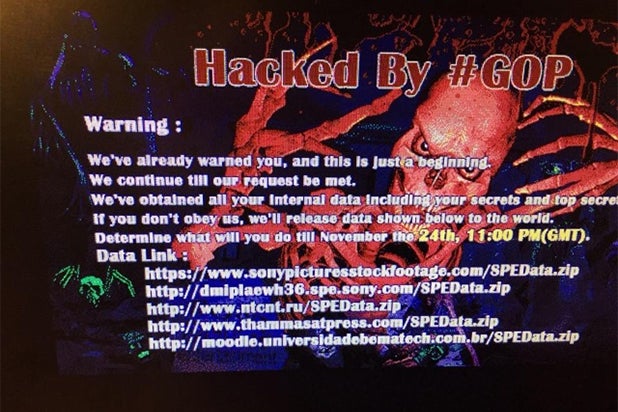 A documentary about last year’s cyberattack on Sony Pictures in retaliation for “The Interview” is in the works from Jehane Noujaim and Karim Amer, the filmmakers behind Netflix’s Oscar-nominated 2013 documentary “The Square,” TheWrap has learned.

The untitled project will span from the day last November, when Sony received an ominous photo signaling the initial hack, to this February, when Amy Pascal resigned as co-chairman, leaving CEO Michael Lynton to handpick her successor.

Noujaim and Amer have been putting the film together under the radar and their research has led them to propose alternative theories about the hackers, who conspiracy theorists have suggested may not be from North Korea, which the FBI blamed for the attack along with President Obama. North Korea has publicly denied any responsibility for the attack.

Some raised eyebrows over the fact that the hackers — calling themselves the Guardians of Peace — targeted select media outlets, including the Hollywood trades, to leak information to the press.

Mike Lerner (“Pussy Riot: A Punk’s Prayer”) is also producing the documentary with Noujaim and Amer, and the trio spoke to experts in cybersecurity and international politics. Noujaim and Amer were already working on a documentary about cyberterrorism when the Sony situation began to unfold. Their earlier film, “The Square,” took aim at the 2011 Egyptian Revolution.

The Sony hack continues to make Hollywood headlines several months later, as not only did Natalie Portman mention the incident during her recent Harvard commencement speech, but a treasure trove of leaked emails was also cited in reviews of Cameron Crowe‘s Sony movie “Aloha.” The incident will surely reverberate for years to come, and serve as a lesson to other studios about the importance of cybersecurity.