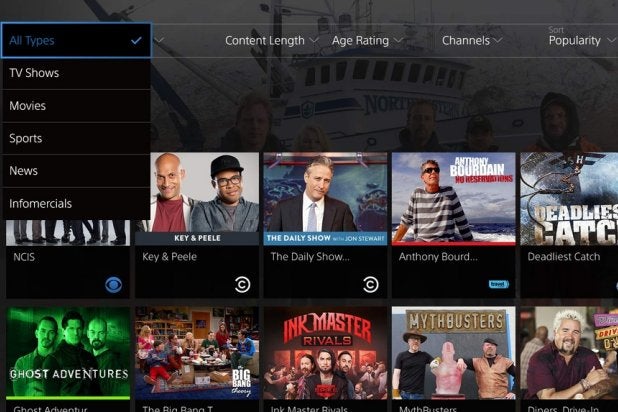 Sony revealed on Thursday that it will be launching a new cloud-based television service through its PlayStation 3 and 4 gaming consoles. Dubbed PlayStation Vue, the new venture is designed to compete with existing cable and satellite providers.

The company has deals in place with major providers like CBS Corp., Fox, Discovery, NBCUniversal, Scripps Network and Viacom and will launch a soft beta shortly. After the invitation-only soft launch in New York, the company plans a larger launch in the first quarter of 2015.

PlayStation Vue will launch with 75 networks and offer live TV, as well as on-demand content. Planned features also include the ability to check out the past three days of broadcasting without setting up timers to record.

Details like pricing and the status of possible additional deals — such as Disney and Time Warner — were not yet made available by Sony, though they did emphasize that there would be no monthly contracts or extra hardware necessary.

They also indicated plans to expand their offering to other devices in the future, including non-Sony devices like Apple’s iPad. For now, though, Sony indicated that there are 35 million PS3s and PS4s in the market.

“This is an opportunity, in my view, to fulfill a longer goal of transforming what was in the past a dedicated game device into a proper entertainment hub,” Andrew House, chief executive of Sony Computer Entertainment, told Business Week. “There is nothing in entertainment as broad as the mass-market live-TV space.”

Sony first spoke about the new initiative at CES 2014 in January, where it was called “PlayStation Now.”