Sony Pictures Classics has acquired all U.S. rights to two Toronto favorites: the Israeli film, "Lebanon," and the Robert Duvall/Bill Murray comedy, "Get Low," the studio announced on Monday. 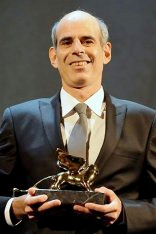 "Lebanon," which also was the Golden Lion winner of the Venice Film Festival, was written and directed by Samuel Maoz, a co-production between Metro Communications and Ariel Films and produced by David Silber, Ilann Gerard and Benjamina Mirnik. It’s Maoz’s first feature film.

From Celluloid Dreams, "Lebanon" joins the classic body of films and the growing collection of recent Israeli films in which filmmakers look at experiences of young people at war and try to make sense of it.

Set almost entirely inside an Israeli tank, four young men set out on a mission in what turns out to be a trip filled with fear, anxiety and ultimately death and the revelation of what makes life worth living.

It also will be included in the prestigious New York Film Festival.

"Lebanon is of those important films that will last forever in the marketplace. We are honored to be bringing Lebanon to the American public,” said Sony Pictures Classics.