Games division sales rose 12 percent, powered by strong holiday business for the company’s PlayStation 4, and that was the biggest profit driver. The Japanese electronics and entertainment giant is banking on more of that this year as it brings its virtual reality headset to global consumers.

Friday’s report showed net income was $997 million in the three months ended Dec. 31. That was up slightly from the comparable quarter last year and above the $820 million estimates of most analysts. Sony generated $167 million of operating income on $2.1 billion in sales in the third quarter.

The numbers were boosted by an accounting shift and foreign exchange gains. That offset slower sales of image sensors for cell phones, traditionally a profit generator. Sony is in the process of acquiring Toshiba Corp.’s sensor operations and that could help.

Shares of Sony have fallen 16 percent this year but rose 6.1 percent to $20.89 before the earnings were released.

Sony’s film division climbed  27 percent to 262.1 billion yen in revenue behind “Spectre,” the latest installment in the James Bond franchise that grossed $199 million in the quarter. But overall, Sony Pictures Entertainment, TV productions and its media networks revenue dropped 12 percent and moved from 7.8 billion yen to losses of 11.7 billion yen ($86 million). 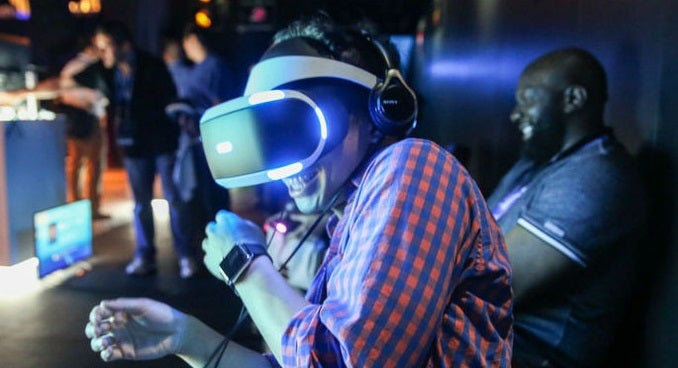 The company has kept its forecast for the highest annual profit in eight years as sales of PlayStation 4 consoles are helping to offset a slump in smartphone demand — the same one that led Apple Inc. to forecast its first sales decline in more than a decade on Tuesday.

Sony consolidated its PlayStation hardware, software and network operations and created a new U.S.-based company, Sony Interactive Entertainment earlier this week. The move underscores the importance Tokyo puts on its PlayStation operation and comes ahead of the consumer rollout — no later than June 30, Sony said — of PlayStation VR, the virtual reality headset (photo above) compatible with its PlayStation 4 console.

The new operation will be based in San Mateo, Calif., and combines Sony Computer Entertainment, which had been headquartered in Japan and creates hardware and games, and Sony Network Entertainment Interactive, which dealt with the PlayStation Network and was headquartered in the U.S. Andrew House, who currently heads both will head the unit.

The company’s leadership believes its 36 million PS4 consoles and experience in the games realm give it an advantage over Facebook Inc.’s Oculus, a rival VR headset that will require a high-end computer to run and is also hitting shelves this year.

Whether it's because of endless delays, fan demands, a director's passion project or a cash grab reboot that seemingly no one ever actually wanted, Hollywood has produced an enormous amount of sequels to beloved films full decades after they originally hit theaters. And with the trend of "requels" or "lega-sequels" reviving any IP with a pulse, there's been no end in sight to how many more we might get. Some of them have been wildly successful with critics and audiences, and others we're just pretending never existed. Here are some of the sequels that took forever to hit the screen.
View In Gallery
View In Gallery
x