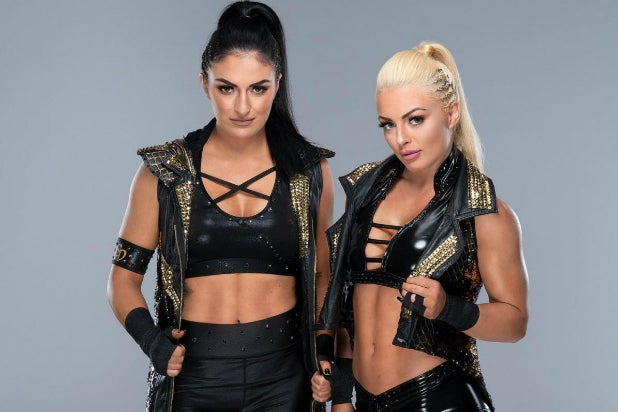 As a product of NXT reality show “Tough Enough” and a WWE main roster performer since 2017, Sonya Deville is hip to the pro-wrestling business. The former mixed martial artist knows that the bigger she and real-life best friend Mandy Rose get as tag team Fire & Desire, the closer they creep to (storyline) breaking up and feuding with one another.

Deville, whose real name is Daria Berenato, just doesn’t want that to happen “anytime soon,” she told TheWrap on Tuesday.

“In terms of breaking up right now, I don’t see it happening anytime soon — and I don’t want it to happen anytime soon, because it’s not time for that,” Berenato said. “I think we’re just getting some real momentum as a tag team and we still compete as singles competitors.”

Also Read: Seth Rollins Says It Was 'a Little Presumptuous' for Dean Ambrose to 'Talk Down' About WWE (Audio)

“We have a really cool chemistry going on right now,” she continued. “We’re just starting to get in our groove, so I would hate to see it ending prematurely. I see us — at least in my opinion — staying together for a while.”

Then again, the two never foresaw themselves being a tag team in the first place. Before their WWE call-up as part of wrestler-turned-manager Paige’s short-lived faction Absolution, Deville and Rose would fantasize about wrestling each other as singles competitors, Berenato said.

After all, at the time, WWE did not even have Women’s Tag Team Championship belts. It does now, and Fire & Desire should be in line soon for a title shot.

For now, the silver lining to not having the gold around their waists lies in what Berenato calls the “realness” of the friendship she shares with Rose, whom she met on “Tough Enough” and subsequently lived with.

“We are truly like sisters,” Berenato said. “Mandy and I stand alone as that one true bond and friendship in the WWE that hasn’t been ruined yet from the business. You see Sasha (Banks) and Bayley, they had a great run, but something always gets in the way. I feel like that’s not the case with Mandy and I because there’s a lot of realness behind our relationship and that’s why the fans buy into it.”

But don’t take our word for it — or hers. Tune in to “SmackDown Live” tonight starting at 8/7c on USA Network, where you’ll see the “Desire” of “Fire & Desire,” Rose, in Deville’s corner for “Fire’s” one-on-one match against Ember Moon.