The news of Eddy’s death was revealed on Instagram by her friend and fellow actress, Octavia Spencer. In her tribute, Spencer wrote, “The world lost another creative angel. Her legions of @generalhospitalabc fans will miss her. My thoughts and prayers are with her loved ones, friends, and fans!”

It’s unclear what Eddy’s cause of death was. Eddy was one of the longest running cast members on the soap, appearing in more than 500 episodes since the show premiered in 2006. She was beloved by fans.

Her character, Epiphany, made her debut in March 2006, as the new Head Nurse after Audrey Hardy stepped down (ironically, Eddy was a licensed vocational nurse in real life). She was a strong character, and didn’t take flack — or slacking — from anyone.

Aside from “General Hospital,” Eddy appeared in several beloved series, getting her television start on “The Drew Carrey Show” and going on to appear in episodes of “Seinfeld,” “Glee,” “Castle” and more. She appeared earlier this year opposite Samuel L. Jackson in Apple TV+’s “The Last Days of Ptolemy Grey.”

Prior to her time on television, Eddy acted on stage, including in a production of Stephen Sondheim’s “Into the Woods,” as the Witch. 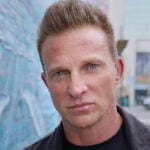