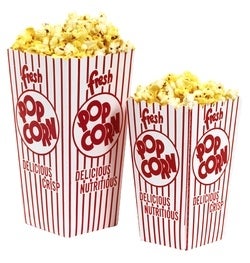 Delivering his remarks at the ShoWest convention in Las Vegas, Lynton cited skyrocketing childhood obesity rates before noting, “adding healthier options to your existing menu is the right thing to do for our industry, for audiences and for our country.”

Lynton said his studio conducted a poll of moviegoers that revealed that two-thirds of them would prefer something healthier than candy, popcorn and soda. According to the research, 42 percent of parents said they’d by more food at the theater if there were healthier options.

Lynton added that he’s not asking theaters to stop selling popcorn, soda and candy. "Audiences love them," he said. "I’m just talking about adding some healthier items to what you already sell."

For decades, concessions have represented one of the biggest profit centers for theater chains. To date, most major chains have resisted pressure to change their typically high-fat, high-sugar, high-calorie menu offerings.