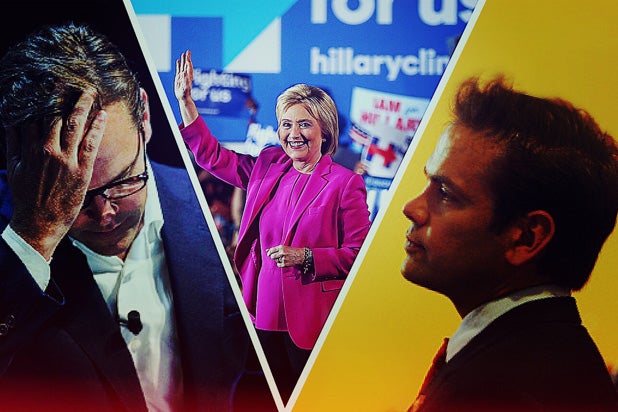 There might be a crisis within the house of Murdoch: One of the conservative media mogul’s sons is said to be voting for — gasp — Hillary Clinton.

Maybe even two of his sons.

Lachlan Murdoch, the 44-year-old executive co-chairman of News Corp and 21st Century Fox, leans decidedly to the left and is more likely to vote for Hillary Clinton than Donald Trump, an individual with knowledge of his political positions told TheWrap.

The less-liberal James, CEO of 21st Century Fox, has also been flirting with Clinton for years. The 43-year-old active political donor to both Democrats and Republicans gave $2,300 to Clinton’s presidential campaign in 2007, according to OpenSecrets.org.

Also Read: No, Rupert Murdoch Will Not Attend a Clinton Fundraiser Tonight

Meanwhile, Papa Murdoch is planning an aggressive push to get Donald Trump elected in November, according to Gabe Sherman, a Murdoch observer and author of “The Loudest Voice in the Room,” a book about the inner-workings of Fox News. According to Sherman, Rupert Murdoch and Fox News CEO Roger Ailes have both recently decided to embrace Trump in hopes of preventing a Hillary Clinton presidency. (Ailes considers her a menace and is her avowed enemy, according to multiple insiders with knowledge of his views.)

Trump’s relationship with Fox News famously went south after the first GOP debate in August, when anchor Megyn Kelly went head-to-head with Trump over his past derogatory comments about women. The exchange started a public tiff between the candidate and network that included Fox News taunting Trump in press releases and Trump pulling out of a January debate.

“It was Murdoch who directed Kelly to hammer Trump during the debut GOP debate, in Cleveland, that sparked the now infamous feud,” Sherman wrote in a New York Magazine article last week, adding that the new Murdoch-Trump alliance “is the result of at least two private meetings between the billionaires this spring, as well as phone calls from Trump’s son-in-law, Jared Kushner.”

Fox News, of course, touts its editorial independence and denies supporting any candidate over any other. Lachlan and James Murdoch declined TheWrap’s request for comment.

David Folkenflik, an NPR reporter and author of “Murdoch’s World,” says that while he has not heard of Lachlan’s voting inclinations, it wouldn’t surprise him if he ended up going for Clinton. After all, his dad went through a similar political soul-searching in 2008.

“Roger Ailes was very concerned that Rupert Murdoch might go with Obama in the [2008] general election,” Folkenflik told TheWrap. “He eventually managed to pull him back from the brink.”

If James or Lachlan decided to join Team Clinton, it probably wouldn’t impact Fox News’ coverage. The network is Ailes country, and he’s raked in record dollars during the turbulent Republican primary season.

The idea of a Murdoch supporting a Clinton isn’t crazy. Murdoch’s daughter Elisabeth famously hosted a fundraiser for then Sen. Barack Obama in 2007. Murdoch Sr. threw his own fundraiser for Clinton’s senate reelection campaign in 2006, and donated $2,300 to Clinton’s presidential campaign the following year. Around this time, CBS took note with a story entitled “Rupert Murdoch Loves Hillary Clinton.”

Just two years ago, the elder Murdoch raised eyebrows by telling Fortune magazine he “could live with Hillary as president,” adding, “We have to live with who we get. We don’t have any choice.”

When pressed by the reporter whether he could ever support Clinton, Murdoch didn’t yell or even laugh. Instead, he said, “It would depend on the Republican candidate totally.”

The Financial Times quoted one unnamed source who said of Clinton and Murdoch: “They have a respectful and cordial relationship. He has respect for the work she has done on behalf of New York. I wouldn’t say it was illustrative of a close ongoing relationship. It is not like they are dining out together.”

Sherman says the relationship goes back to a time when Murdoch had some high-ranking Democrats in his News Corp. inner circle, including advisor Gary Ginsberg and Peter Chernin. But Sherman says that’s that’s no longer the case.

“Many of the people pushing Murdoch into Clinton’s orbit are no longer there,” he said.