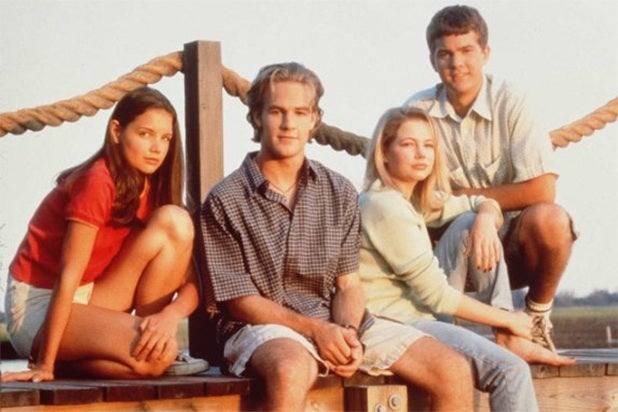 If you were hoping “Dawson’s Creek” would go to the way of “Roseanne,” “Will & Grace” and “Murphy Brown” in the reboot department, we’re sorry to be the ones to tell you your prayers probably will not be answered.

The stars of The WB teen soap — which wrapped in 2003 — said in a recent interview with Entertainment Weekly they aren’t so keen on bringing it back.

“It would have to be a reinvention of sorts,” James Van Der Beek said. Katie Holmes added, “What I love about this show is that it existed at a time pre-social media, pre-internet, and it was nostalgic when we were shooting it. So I really like it where it is, to be honest.”

In the series finale, Jen (Michelle Williams) died after a heart attack, with her young daughter  being taken in by her best friend Jack (Kerr Smith) and his partner Doug (Dylan Neal). Dawson (Van Der Beek) is a budding director who finally gets to meet his lifelong idol, Steven Spielberg. And Joey (Holmes) and Pacey (Joshua Jackson) proved to be the show’s one true pairing, as they lived happily together in New York City.

“Dawson’s Creek” creator Kevin Williamson says revisiting the series now could be tricky because of where he is in his life.

“‘Dawson’s Creek’ was me expressing myself at that point in time,” Williamson said. “And here I am, at another age, at another point in time. I don’t know what I could emotionally bring to the table. I can’t wait for someone else to do it. I don’t think it’s going to be me. But I’ll be happy to watch it.”