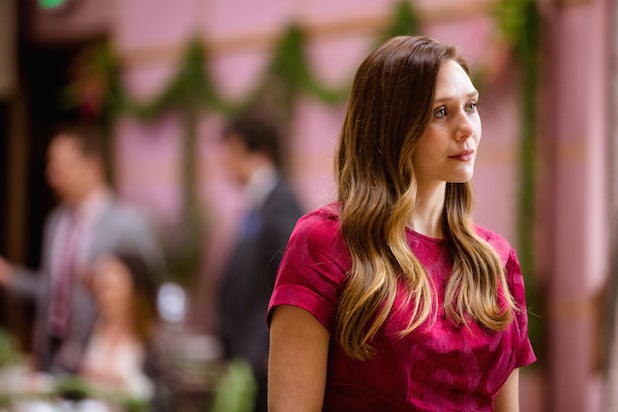 Elizabeth Olsen in "Sorry for Your Loss" (Image credit: Facebook)

Krystina Edwards Nagle lost her husband in September from complications during surgery, when he was only 48. She can’t exactly describe how it felt to go through his books, his clothes, his prized watch collection.

But in Facebook Watch’s “Sorry for Your Loss,” she has found a show that comes close to capturing how she feels. “Sorry for Your Loss” stars Elizabeth Olsen as Leigh Shaw, a young widow coping with the recent death of her husband, Matt. In one scene, she goes through his clothes, just like Edwards Nagle had to do.

“When people think about losing a spouse and being a widow, it’s when you’re older. That was kind of the first thing that hit me,” Edwards Nagle said. “And [Leigh] lost her husband so unexpectedly. It was quick, it was sudden, and it was a surprise. So that hit me as well, because that was the kind of thing I went through with my husband.”

Because the show is on Facebook, viewers are surrounded by others going through the same feelings they are.  Social media can seem heartless, a way for strangers to fight and belittle one another. But the comments page for “Sorry for Your Loss” is different.

The people who log in to share their feelings include widows, widowers — and anyone who has lost someone they love. That reaction was striking for both showrunner Lizzy Weiss and creator Kit Steinkellner.

“I’ve never seen a community like this formed from a show,” Weiss said. “That’s what’s so incredible about the power of the show, Facebook and grief altogether, is that a community has found each other online.”

After seeing the pilot, which opens with Leigh talking to her grief group, one commenter said he had started going to his own meetings to work through the pain of losing his wife. Until the show, he “didn’t even know grief groups were a thing,” Steinkellner recalled him saying.

“It’s helped me so much, I felt so alone. And now that I know about this and participate in this group, it’s going to change my life,” the man added.

“That was an amazing note,” Steinkellner said.

Edwards Nagle said the show caught the attention of “everybody” at her weekly grief group meetings, quickly becoming one of their favorite topics to bond over.

For many other viewers TheWrap spoke with, though, “Sorry For Your Loss” is a more intimate experience.

Demi Rodgers, a 25-year-old widow from Texas, said the show has been cathartic — a show that reflected the “what the hell do I do now?” stage of her life, as she put it — but something she prefers to watch privately.

“It’s kind of hard for widows to reach out to each other because it’s a sensitive subject that we understand is sensitive,” Rodgers said. “We do want to connect with others, but we also don’t want to overstep that boundary and be disrespectful or inconsiderate of where they’re at in their own journey.”

Jessica Finocchio, 44, lost her husband less than six months ago. After finding the show a few weeks ago, she watched all ten episodes in two days. Finocchio echoed Rodgers, saying the show was too personal to discuss with other widows, because it’s a pain you “can’t even explain.”

But she’s thankful the show exists, believing the journey Leigh goes through mirrors the same one she’s on right now. “When I found it, I couldn’t believe it. It’s like my life,” Finocchio said.

Plenty of people feel the same way. “Sorry For Your Loss” had 5.4 million viewers in its first season, making it one of the year-old Facebook Watch’s most successful shows.

Naomi Tapia, a 23-year-old graduate student from Orange County, California, said the show highlights the “little things” that come with the mourning process. She lost her mother last year.

“The first episode got me,” Tapia told TheWrap. “When [Leigh] said ‘everyone just kind of moves on because it’s over for them.’ People stop calling, stop texting, because they’re past that point, they’re past that initial shock. And don’t realize that for us, it’s an ongoing thing, because we have to learn to live in this new world where something was taken.”

Tapia also credited the show for touching on death — a taboo subject for most TV shows.

“I think people are excited that a show is finally portraying something people are so scared to talk about. Because society doesn’t want to talk about these dark things that happen,” she said.

Scott Ayers, a fan of the show from New York, struck a similar note. “In our society, grief and coping with the loss of a loved one seems to be closed off for discussion, and this shows ignites a conversation on the topic. It’s powerful.”

Several viewers noted the realistic timeline of “Sorry For Your Loss.” The grieving process, when usually shown on TV, is truncated. Characters snap back quickly.

Leigh doesn’t. She struggles. She gives up her career and moves in with her mother and sister. She goes to meetings with other widows.

The show uses flashbacks of Matt to underscore Leigh’s sense of loss. There are scenes where Leigh breaks dishes in anger — and also scenes where she’s capable, if only for a moment or two, to enjoy life.

“It’s funny, because I’m not sitting there watching it and crying the whole time. Because there are moments that are really fun. And that hits me, because she’s able to get back to work and hang out with her friends,” Edwards Nagle said. “It’s a balance. You just don’t know how you’re going to move on. There are sometimes that you’re almost able to feel normal again, and that’s another thing the show portrays really well.”

That “rollercoaster” of emotions, as Rodgers put it, is something widows and others grievers know all too well. “Sorry For Your Loss,” by highlighting both the pain and the occasional flickers of happiness that comes with losing a loved one, has attracted viewers who never expected to see their experience captured on television.

“It’s a show that finally gives us a voice,” Tapia said.