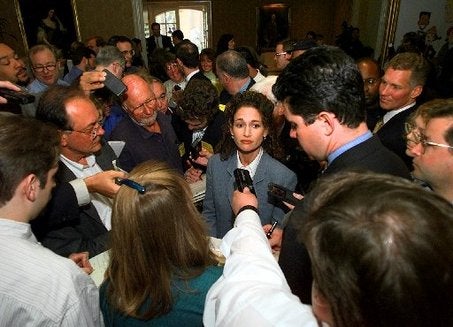 Everyone’s expecting fireworks. But it could likely be a letdown.

That’s the best way to approach Sunday’s showdown between the nation’s TV press and NBC entertainment superchief Jeff Gaspin (along with network president Angela Bromstad). Thanks to Late Night Crisis 2010, there’s an expectation Gaspin will face a fierce grilling.

The recent history of TCA executive sessions has been that those with the most buildup tend to end up disappointing. And given the fact that Jeff Gaspin didn’t create NBC’s Leno-Conan problem — he’s just cleaning it up, with boss Jeff Zucker taking the brunt of the heat — he can rightly claim, "Not me" if attacked too much.

Gaspin might also end up surprising the assembled press corps with his bluntness and candor — if, that is, NBC lets Gaspin be Gaspin. While he can sometimes slip into spin mode, anybody who knows Gaspin knows that he has a tendency for straight talk. If he’s open and candid enough, he might just end up turning the terrible tide of terrible PR currently afflicting NBC.

One of the few TCA sessions in the past 15 years to live up to the hype was in 1997, when then ABC chief Jamie Tarses (now a successful producer) came to TCA days after the New York Times Magazine published this jaw-dropping profile of her… and as rumors she was about to be sacked swirled around here. Bob Iger and other Disney executives flatly denied she was in trouble… and soon afterward, fired her anyway.

Things were so tense, before Tarses’ formal session, reporters demanded Tarses come out of hiding at the Pasadena Ritz-Carlton (now the Langham) to offer a brief sign that she was still on the job. Kevin Brockman, who ran publicity for ABC at the time arranged the drive- by… but rather than stop and talk to reporters, Tarses just kept walking. As did the reporters (yes, including me).

It’d be nice to expect Sunday’s session to match that level of drama. But like so much about TV these days, expectations are diminished.

Now, if Jeff Zucker — who is in LA this weekend — decided to drop by Pasadena and take the heat himself? Well, now that would be something.

A reporter can dream.