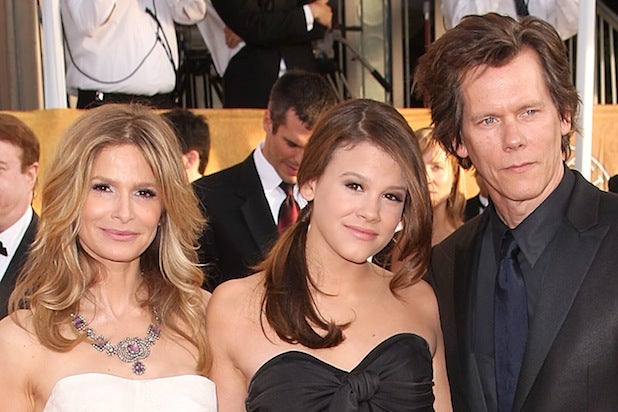 Sosie Bacon, the daughter of Kevin Bacon and Kyra Sedgwick, has been named this year’s Miss Golden Globe.

The annual honoree — who can also be Mr. Golden Globe, by the way — is traditionally the son or daughter of a celebrity (usually a celeb couple) who assists in the Hollywood Foreign Press Association’s Golden Globe Awards. Bacon follows in the footsteps of several celebs’ progeny who have gone on to have careers, including Rumer Willis, Laura Dern and Miss Anastasia Steele herself — Dakota Johnson.

Though her parents apparently weren’t too keen on her acting, Sosie – now 21 – debuted on the bigscreen at age 10 in the movie “Loverboy,” which was directed by her father, playing a younger version of her mother in a flashback. She was also on her mom’s show, “The Closer,” playing her mom’s character’s niece.

HOLLYWOOD, CA, November 21, 2013 – The Hollywood Foreign Press Association (HFPA) has selected actress Sosie Bacon as Miss Golden Globe 2014 for the 71st Annual Golden Globe® Awards. HFPA President Theo Kingma made the announcement this evening with the help of 2013 Miss Golden Globe Francesca Eastwood at the first party of the 2014 Golden Globe Awards Season, hosted by the HFPA and InStyle. The star-studded event was held at Fig and Olive in West Hollywood and was presented by Aquafina Flavorsplash.

“I am delighted to have Sosie Bacon continue the tradition and have her be our 2014 Miss Golden Globe,” said Kingma. “As we all know, she comes from a very talented family and this gets us one degree closer to Kevin Bacon.”

“I am so grateful to the Hollywood Foreign Press Association for naming me this year’s Miss Golden Globe. As a young actress who is just beginning my career, it is truly an honor to be a part of such a special night in film and television.  I can only hope to continue the legacy and tradition of Miss Golden Globe by following in the footsteps of my predecessors.”

Bacon made her acting debut at the age of 11 in the film Lover Boy, where she played the younger version of her mother’s character “Emily.” Sosie also played the role of “Charlie” in TNT’s hit series The Closer and can next be seen in the independent film Off Season directed by Robert Cole. Sosie currently resides in Los Angeles, California.  For more information, please follow her on Twitter (@realsosiebacon) and Instagram (sosiebacon).

Produced by dick clark productions in association with the HFPA, the Golden Globe Awards are viewed in more than 160 countries worldwide and are one of the few awards ceremonies to include both motion picture and television achievements.

About the Hollywood Foreign Press Association:

Founded in the 1940s during World War II, the HFPA was originally comprised of a handful of LA based overseas journalists who sought to bridge the international community with Hollywood, and to provide distraction from the hardships of war through film.  Sixty-eight years later, members of the HFPA represent 55 countries with a combined readership of 250 million in some of the world’s most respected publications.  Each year, the organization holds the third most watched awards show on television, the Golden Globe Awards, which have enabled the organization to donate more than $18 million to entertainment related charities and scholarship programs. For more information, please visit www.goldenglobes.org, and follow us on Twitter (@goldenglobes) and Facebook (www.facebook.com/goldenglobes) for exclusive celebrity videos and up to the minute Golden Globes news!

Founded in 1957, dick clark productions, inc. (dcp) is a leading independent producer of television programming. dcp produces perennial hits such as the “American Music Awards,” “Golden Globe Awards,” “Academy of Country Music Awards,” and “Dick Clark’s New Year’s Rockin’ Eve with Ryan Seacrest.”  dcp also produces popular weekly television programming, including “So You Think You Can Dance,” and owns and maintains one of the world’s most unique and extensive entertainment libraries, which includes more than 30 years of “American Bandstand” footage.  For additional information about dcp, please visit www.dickclarkproductions.com.