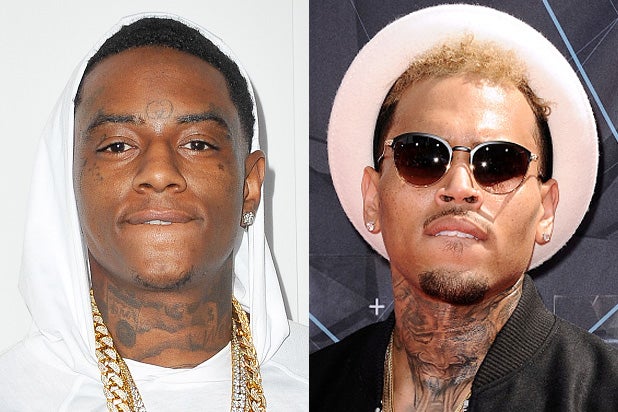 Chris Brown and Soulja Boy are already off to a rocky start in the new year and have even planned a boxing match to work out their issues. What gives?

It all started when the “Crank That” artist claimed that Brown called him up wanting to fight because the rapper liked Karrueche’s (Brown’s ex-girlfriend) photo on Instagram. According to Soulja Boy’s tweets, he wasn’t the least bit scared over the prospect of one-on-one fisticuffs with the R&B singer.

“Chris brown just called me and said he wanna fight me because I liked @karrueche picture on Instagram this ni— a bitch,” wrote Soulja Boy on Monday. Minutes later he also tweeted: “Aye @chrisbrown pull up ni— I’ll knock yo Bitch Ass out stop snorting so much coke ni—…”

A gossip news outlet shared the post that initially got Brown riled up:

In true Chris Brown fashion, the artist wasn’t going to let Soulja Boy get away with fawning over his former lady friend and also threatening him on social media. The “Forever” artist quickly uploaded a video calling the rapper a snitch. Soulja Boy was arrested in December for violating his probation, but got his charges dropped. Brown insinuated that the rapper got out of custody because he gave up information to the police.

But things didn’t stop there, if anything, the feud escalated. The “Tell ‘Em” artist didn’t appreciate Brown’s video calling him out, so he responded with a post of his own.

“When I see you, you catching the fade,” the rapper threatened Brown in the video (above).

He also called out the “Royalty” artist for his domestic abuse against former girlfriend, Rihanna.

Somehow in the midst of all this drama, Orlando Brown — the one from Disney’s “That’s So Raven” — got thrown into the mix as well.

The actor had some choice words for Soulja Boy.

“You shouldn’t have did this s—,” Orlando Brown (no relation to Chris) started off in a tirade against the rapper.

Next, Brown (the singer) responded that the only reason he ever comments on Karrueche’s photos is so that she can feel good about herself. The artist was known to leave messages under his ex’s pictures insinuating that he wanted her back which caused a great deal of commotion on social media. (Remember, this whole feud started because Soulja Boy accused Brown of getting angry at him after leaving heart eye emojis under the model’s picture.)

The R&B singer seemingly had enough of all this talk so he decided to make things a little more official by inviting Soulja Boy to a boxing match — three rounds, three minutes.

“I don’t talk shit, this shit is beneath me. I wanna bring black people together, but you gotta get your ass whooped,” Brown said in the video. “At the end of the day what’s the first joke you’re going to have? The Rihanna joke, my n—-? I was 17, I’m 27 now, you’re going to get a grown man ass whooping.”

Brown then went on to show his followers a video of Soulja Boy singing along to “Poppin,'” his popular single from 2006 and went on to comment on how the rapper is a fan of his.

The feud wasn’t over yet, though. Soulja Boy came back with his own video (again) accepting Brown’s boxing challenge and went a step further by saying that he had recorded the entire conversation when he called him upset over Karrueche’s picture. The rapper also said that Brown reacted similarly when Rihanna came to the rapper’s concert after the singer hit her.

Brown (actor) popped in again with some unintelligible comments of his own.

At this point, Brown (singer) had enough of Soulja Boy and released a screenshot of a text that the rapper had sent him, seemingly trying to squash things.

Brown (singer) may have realized how iffy the feud looked to fans and parents when he promised that all proceeds from this boxing match would go to charity.

Just hours since the first feud of 2017 started, Karrueche decided to step in and say her piece because, of course, this all apparently started due to her picture.

“We just brought in a new year and this is what we doing?” wrote the model.”This isn’t cool or funny, it’s draining not just for me but for everyone.”

The R&B artist didn’t appreciate his ex’s comments though and noted that she was only getting attention because of him.

“All your friends are your friends because you was Chris Brown’s girl,” wrote the artist amongst a myriad of other choice words.

No word yet from Soulja Boy following Brown’s last response.

Check back here for updates.