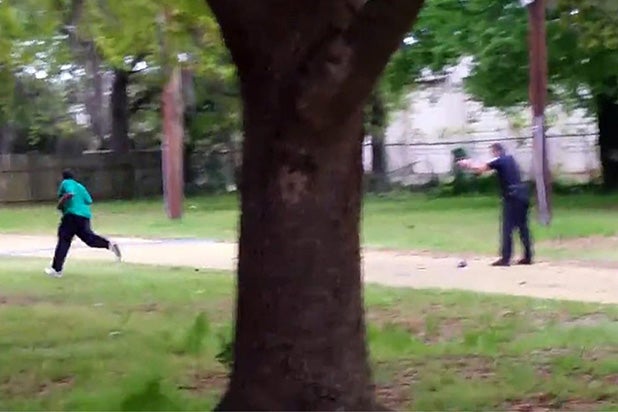 The footage shows Officer Michael Slager, 33, shooting Walter Scott, 50, as he ran away from Slager into a grassy lot in North Charleston on Saturday. Slager said he feared for his life because Scott had taken his stun gun in a scuffle after a traffic stop for a broken tail light, according to the The New York Times, which was the first media outlet to release the video.

Actor Isaiah Washington was among the Hollywood stars who took to social media with reaction to the shocking footage.

“I have 2 sons to raise in this country and this #WalterScott atrocity weakens my hope that they can survive in this Nation,” the former “Grey’s Anatomy” actor wrote on Twitter.

Meanwhile, “Avengers: Age of Ultron” writer-director Joss Whedon tweeted, “At this point, the Slager murder seems like a message, a mafia thing, like it’s meant to shut people down or set them off. It HAS TO END.”

Officer Slager was charged with murder on Tuesday evening, as authorities reacted swiftly to the video of the deadly encounter in the wake of the recent protests in Ferguson, Missouri, following the shooting death of unarmed teen Michael Brown. A short time later, a magistrate denied bond and the officer is currently being held at the Charleston County Detention Center.

A murder conviction in the state could lead to the death penalty or up to 30 years to life in prison, according to the South Carolina Law Enforcement Division.

The video capturing the killing, which was taken by a bystander and provided to The New York Times by the Scott family’s lawyer, begins in a vacant lot, apparently moments after Officer Slager fired his Taser. The footage shows the apparently unarmed victim 15 to 20 feet away. He runs away and then drops to the ground after what sounds like eight shots are fired. The video then shows Officer Slager standing next to Scott’s handcuffed body and dropping something, which many have speculated was a taser to make it look like he had a weapon.

Below is a collection of reactions to the police shooting.

I have 2 sons to raise in this country and this #WalterScott atrocity weakens my hope that they can survive in this Nation. Now what?

Okay, watching the #WalterScott video was horrible, but I think the brave person who captured the murder is a Hero and a Godsend #Truthdom

You look at the #WalterScott video & think it shows something other than the wrongful murder of a fleeing man? What is wrong with your eyes?

At this point, the Slager murder seems like a message, a mafia thing, like it's meant to shut people down or set them off. It HAS TO END

Cold blooded murder. Condolences to the family of #WalterScott. Perhaps this can be a turning point in true accountability. Haunting video.

Thoughts and prayers for the family and friends of #WalterScott. It's time to start the healing. Let's pray for #NorthCharleston.

Here is the video that was originally posted by the New York Times. A warning some readers may find the footage disturbing.