"South Park" creators Trey Parker and Matt Stone lashed out at Comedy Central on Thursday over its treatment of a controversial episode of the show that lampoons the prophet Muhammad. In a statement on the show’s website, the pair chastised the network for censoring references to the Muslim religious figure.

"In the 14 years we’ve been doing South Park we have never done a show that we couldn’t stand behind," Parker and Stone wrote. "We delivered our version of the show to Comedy Central and they made a determination to alter the episode. It wasn’t some meta-joke on our part. Comedy Central added the bleeps. In fact, Kyle’s customary final speech was about intimidation and fear. It didn’t mention Muhammad at all but it got bleeped too. We’ll be back next week with a whole new show about something completely different and we’ll see what happens to it."

This twist just in from the Associated Press, for those who watched tonight’s episode of "South Park" (or didn’t):

"A radical Muslim group has warned the creators of ‘South Park’ that they could face violent retribution for depicting the prophet Muhammad in a bear suit during last week’s episode. 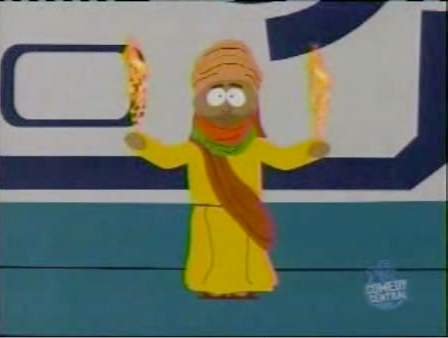 "The website RevolutionMuslim.com has since been taken down, but a cached version shows the message to ‘South Park’ creators Trey Parker and Matt Stone. The article’s author, Abu Talhah Al-Amrikee, said the men ‘outright insulted’ the religious leader.

"The posting showed a gruesome picture of Theo Van Gogh, a Dutch filmmaker who was shot and stabbed to death in an Amsterdam street in 2004 by a fanatic angered by his film about Muslim women. The film was written by a Muslim woman who rejected the Prophet Muhammad as a guide for today’s morality."

(Read more of the story at the Associated Press.)

Meanwhile, I actually watched tonight’s episode for the benefit of readers. Brilliant, as per usual. After making fun of Tom Cruise as being a "fudge-packer," there is a community meeting where residents argue about bringing in the Muslim prophet:

"If Mohammed appears in ‘South Park’ we get bombed!" says one. "Showing an imagine of him is completely off-limits and censored!"

But Cruise wants Mohammed, because the prophet "has a power that makes him impervious to being made fun of."  He adds: "Once we have Mohammed, we can take his power from him."

The South Park kids go to a god convocation, and try to negotiate showing Mohammed with Jesus, Buddha and others. They bring Mohammed in a U-haul, to show the celebrities (Tom Cruise. Liza. Tim Burton. Jimmy Buffett. Oprah. Bono.) how "not to be made fun of." Then they put him in a bear suit.