“South Park” is going far into the future, and this time it didn’t need to freeze Cartman.

In the first (and probably only) trailer for the the show’s upcoming special event on Paramount+, entitled “Post Covid,” it appears we’re going to see what Kyle, Kenny, Stan and Cartman are like as full-grown adults.

Watch the short video above.

Here is the logline for the special, which premieres on Thanksgiving:

In ‘South Park: Post Covid,’ we’ll find out the answer to the question: what happened to the children who lived through the pandemic? Stan, Kyle, Cartman and Kenny survived, but will never be the same post COVID. 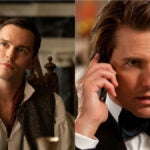 “Post Covid” is the first of 14 “South Park” specials for Paramount+. A second one will premiere in December.

“South Park” was renewed through Season 30 at Comedy Central, and 14 original movies based on the show have been ordered at Paramount+ as part of a six-year megdeal signed by co-creators Trey Parker and Matt Stone. New episodes of the show will still air first on Comedy Central.

Parker and Stone’s new pact with ViacomCBS’ MTV Entertainment Studios extends their partnership through 2027 and is worth $900 million.

Co-created by Parker and Stone, “South Park” premiered on Comedy Central on Aug. 13, 1997. It most recently aired a full season, its 23rd, in 2019, with two standalone specials debuting during the pandemic in September 2020 and March 2021. No premiere date has been set for Season 24 yet.