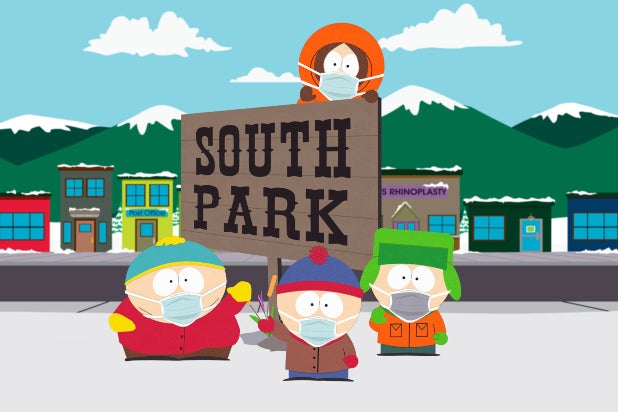 “South Park” didn’t give us a new season’s worth of social commentary in 2020, but Matt Stone and Trey Parker are giving us another COVID-themed special that seems like it will mostly poke fun at QAnon conspiracies.

“South ParQ: The Vaccination Special” (get it?) will premiere on March 10. Like last year’s “Pandemic Special,” it will be an hour long and will simulcast on MTV2.

Here’s the logline for “The Vaccination Special”: The citizens of South ParQ are clamoring for the COVID-19 vaccine.  A hilarious new militant group tries to stop the boys from getting their teacher vaccinated.

“The Pandemic Special” hit a seven-year high for the long-running comedy on Sept. 30 of last year, reaching 4.05 million total viewers. It was simulcast across a number of ViacomCBS cable networks, including MTV, VH1, CMT, Paramount Network, TV Land and Pop TV. On Comedy Central alone, the audience for the special amounted to 2.3 million total viewers.

The episode centered on Randy coming to terms with his role in the COVID-19 outbreak as the pandemic presented continued challenges to the citizens of South Park, including the kids heading back to school.

Like the previous special, “The Vaccination Special” is not considered part of “South Park’s” upcoming 24th season, which will (hopefully) premiere later this year. The series, from creators Matt Stone and Trey Parker, is currently renewed through Season 26.