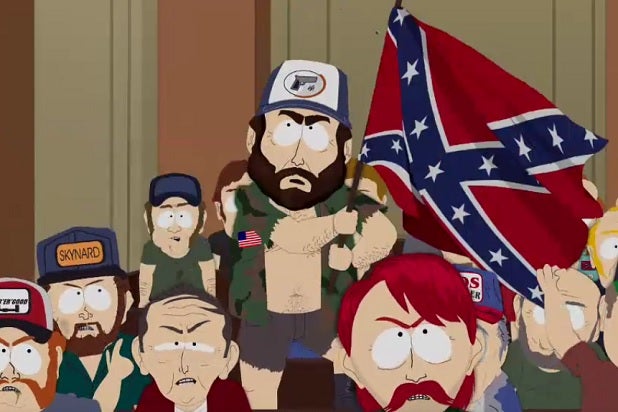 We’re guessing Trey Parker and Matt Stone are going to poke fun at #AllSides with the upcoming Season 21 premiere of “South Park.”

The long-running Comedy Central series released a description and video teaser Monday for the season premiere, which revealed that the episode will touch on the recent flareup of white nationalism in America. There’s a particular nod to this summer’s violence in Charlottesville, Virginia.

“Protestors armed with tiki torches and confederate flags take to the streets of South Park,” the description of the episode, titled “White People Renovating Houses,” reads. “Randy comes to grips with what it means to be white in today’s society.”

In August, Charlottesville, Virginia, erupted in violence when a group of white nationalists, some bearing tiki torches, descended on the city to protest the planned removal of a statue of Confederate general Robert E. Lee.

In the ensuing face-off with counter-protesters, one person was killed when a car plowed into a crowd. During the weekend of unrest, two state troopers also lost their lives in a helicopter accident.

What’s not so clear is whether the episode will take aim at President Donald Trump, who was criticized for his response to the unrest.

In an interview earlier this year with Australia’s ABC News, Parker and Stone said that they will “back off” from Trump and political humor when they write new “South Park” episodes, because they have no idea how to make today’s political events look more ridiculous.

“It’s really tricky now as satire has become reality,” Parker said. “We were really trying to make fun of what was going on [last year] but we couldn’t keep up. What was actually happening was way funnier than anything we could come up with. So we decided to just back off and let them do their comedy and we’ll do ours.”

Watch the preview of the “South Park” premiere below.