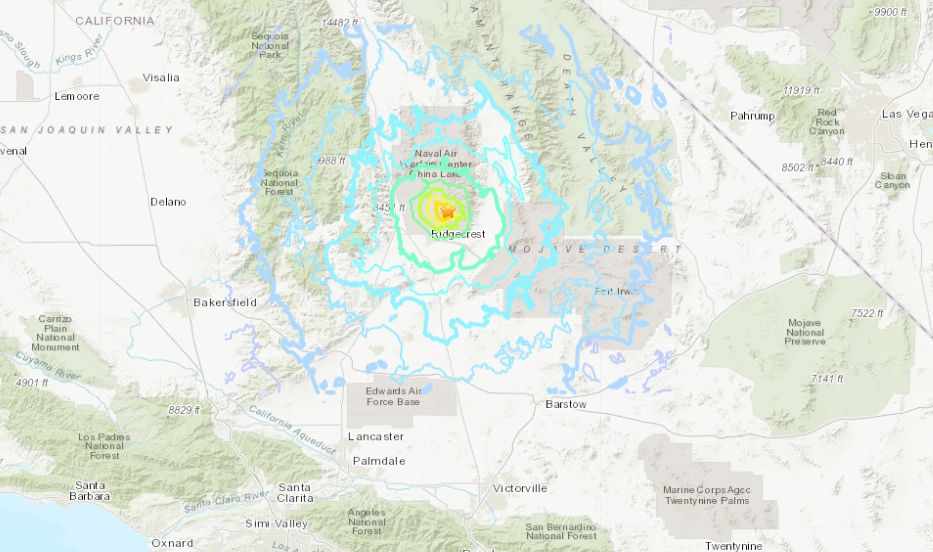 A 7.1 magnitude quake shook Southern California on Friday night, according to the U.S. Geological Survey. It’s the largest to hit the region in 20 years, and was followed by two 5.5 magnitude aftershocks.

The quake’s epicenter, near the town of Ridgecrest in the Searles Valley, was the same region as that of the 6.4 magnitude quake that occurred around 10:30 a.m. on Thursday. Friday’s quake occurred around 8:19 p.m.

The temblor follows a 5.4 magnitude earthquake that rattled the area around 4:07 a.m. Friday, but according to USGS Seismologist Dr. Lucy Jones, it and the quake Thursday are now understood to be foreshocks to the Friday night shaker.

In magnitude, Friday night’s quake was significantly larger than the 6.6 Northridge quake in 1994, but it affected a significantly less densely populated area. The extent of the damage is not yet known, but there were reports of fires and some property damage in and around Ridgecrest, and approximately 2,200 area residents were without power, according to the Los Angeles Times. So far there are no reports of fatalities, according to officials in Kern County, where Ridgecrest is located.

Meanwhile, Gov. Gavin Newsome said he had activated the state’s Office of Emergency Services “to its highest level.”

In Los Angeles, 100 miles south of the epicenter, the L.A. fire department said it had determined there were “no injuries or significant damage” in the city. As evidence of how easy L.A. had it during the quake, a Dodgers game continued without interruption, the shaking caught on live TV.

Further south in Anaheim, Disneyland attendees reported on social media that all rides were closed for inspection after the quake. Disneyland hasn’t issued a public statement, but at approximately 9:30 p.m. all rides were labeled temporarily closed on the Disneyland mobile app. By 10 p.m., however, wait times were once again available. Representatives for the theme park did not immediately respond to a request for comment from TheWrap.

Visitors to Knott’s Berry Farm also reported that rides were temporarily closed. Representatives for the park did not immediately respond to a request for comment.

At Six Flags Magic Mountain in Valencia, all rides were shut down for safety inspections immediately following the quake. The park resumed normal operations approximately an hour later.

“You know we say we have a 1 in 20 chance that an earthquake will be followed by something bigger? This is that 1 in 20 time,” Jones said on Twitter, repeating a phrase she used during the press conference.

Jones also cautioned that there may be more to come. “Like any quake, today’s M7.1 has a 1 in 20 of being followed by something even bigger. Smaller quakes – M5s are likely and a M6 is quite possible,” she said.