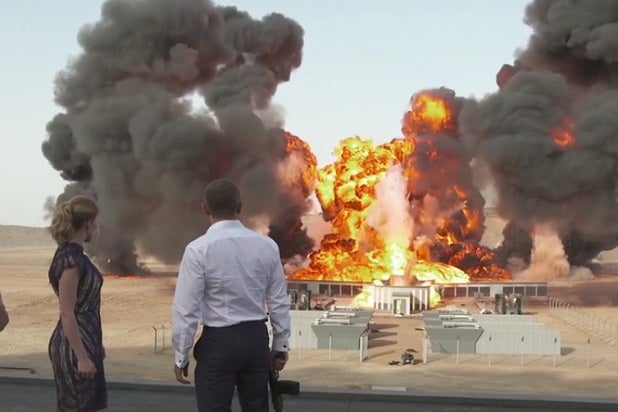 Quite the explosive development, Mr. Bond.

The latest James Bond movie, “Spectre,” has landed in the record books — not for its box-office haul, although it had an impressive opening weekend of over $75 million — but for making a big, fiery onscreen kaboom.

According to Guinness World Records, “Spectre” boasts the largest film-stunt explosion ever. The big boom in question, which was filmed in Morocco, yielded nearly 70 tons of TNT and lasted for more than 7.5 seconds.

The official holder of the title is Chris Corbould, the film’s special effects and miniature effects supervisor. But that didn’t stop “Spectre” producers Michael G. Wilson and Barbara Broccoli from grabbing the spotlight and declaring. “It is absolutely tremendous that the Guinness World Records have recognized Chris Corbould’s incredible work in ‘Spectre’ in which he created the largest explosion ever in film history,” they said.

In the past, the 007 film franchise has set records for longest speedboat jump in a film (in “Live and Let Die”); highest bungee jump from a structure in a movie (for “GoldenEye”); and highest ski base jump on film (“The Spy Who Loved Me”).