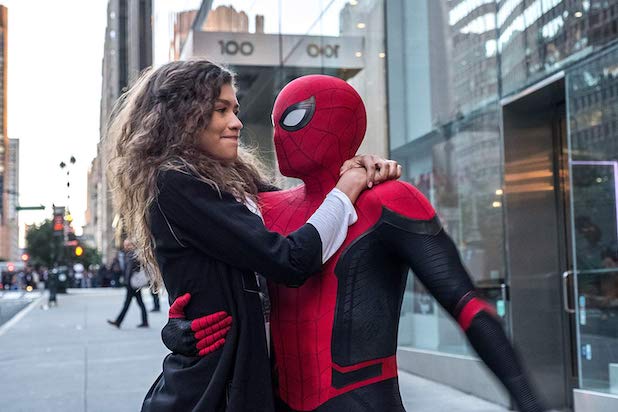 The Marvel-mania that has loaded Disney’s box office receipts has now turned its good fortunes to Sony, as “Spider-Man: Far From Home” has earned a six-day box office opening of $185 million, the largest ever for a film released over the Fourth of July weekend.

By comparison, the 2017 film “Spider-Man: Homecoming” earned $154 million in its first six days, representing a 20% increase for this sequel. Worldwide, the film opened in all territories except Italy after releasing in China and Japan last weekend, and now has a global total of $580 million.

For Sony, the success of “Far From Home” is a welcome reverse of fortune after the release of last month’s “Men In Black: International,” which has been relying on overseas grosses as it has only grossed $72 million so far in North America. “Far From Home” has set a new six-day opening record for the studio, as well as records for the highest ever Tuesday gross with $32 million and the highest July Thursday gross with $25 million on July 4.

Farther down the charts, Disney continues to pass box office milestones on an almost weekly basis with “The Lion King” on the horizon. Pixar’s “Toy Story 4” crossed $300 million domestic and $650 million worldwide after earning $34 million in North America in its third weekend to take the No. 2 spot on the charts.

The animated film is also performing exceptionally well in Latin America, as Mexico leads all overseas territories with $60 million. “Toy Story 4” has now set a new record in the region as the highest grossing animated film ever, passing fellow Pixar films  “Toy Story 3” and “Coco.” “Aladdin,” meanwhile, crossed the $900 million global mark on its seventh weekend, earning $7.6 million domestic to bring its total to $921 million.

Outside of Disney and Marvel, Universal’s “Yesterday” has been able to hold very well thanks to strong audience word of mouth. The $26 million Beatles-inspired romcom grossed $10.7 million, dropping just 37% from last weekend’s $17 million opening for a $36 million total. Last week’s other release, WB/New Line’s “Annabelle Comes Home” grossed $9.5 million this weekend to bring its total to $49.9 million, 24% behind the pace of the horror series’ last installment, “Annabelle: Creation.”

Finally, A24’s “Midsommar” opened outside the top five with $6.3 million from 2,707 screens. Released on Wednesday, the Ari Aster horror film has grossed $10.9 million, marking the largest opening for an indie film so far this year.