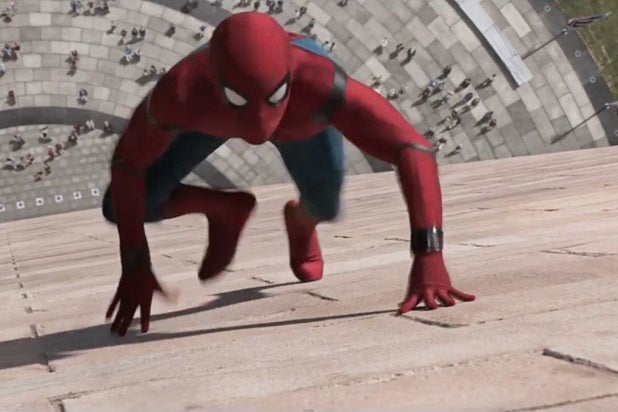 Columbia Pictures and Marvel Studios’ “Spider-Man: Homecoming,” the long-awaited solo debut of Spider-Man in the Marvel Cinematic Universe, is looking at a possible $100 million-plus opening at the domestic box office this weekend.

Independent trackers have the film making $90-110 million this weekend, with Sony Pictures projecting a more conservative $80 million from 4,341 locations.

By comparison, Sony’s last Spider-Man film, the Andrew Garfield-starring “Amazing Spider-Man 2,” opened to $91.6 million and went on to rack up a $202.8 million domestic cume ($708.9 million global).

The biggest opening for a Spidey film belongs to the Tobey Maguire era, with “Spider-Man 3” grossing $151 million in its opening and going on to gross $890.1 million worldwide in 2007.

Also Read: 'Spider-Man: Homecoming' Is 'One of the Best Marvel Movies Yet' and 6 More Glowing Reviews

It’s only been 15 years since the first “Spider-Man” swung into theaters and kicked off the Marvel movie craze in earnest by becoming the first movie to open with more than $100 million.

Yet “Homecoming,” starring 20-year-old British actor Tom Holland as the teenage webslinger, marks the third reboot Spidey has received since then. But the circumstances surrounding this reboot are far different than the one that saw Garfield slip into the red and blue suit back in 2012.

Thanks to a deal made between Sony and Marvel Studios’ parent company, Disney, Holland made his debut as Spider-Man with a special cameo in last summer’s “Captain America: Civil War,” which served as a lead-in to this solo film. As part of the deal, Sony will get all of the box office revenue from “Homecoming,” while Marvel Studios retains merchandising rights.

The deal also means that the godfather of the MCU, Robert Downey Jr.’s Tony Stark, will play a supporting role in “Homecoming” as Peter Parker’s link to the Avengers is further developed.

With Holland set to appear as Spidey again in next year’s “Avengers: Infinity War,” Sony will be hoping that Marvel diehards who treat each new installment as a can’t-miss event will turn out as they have for “Civil War” and “Guardians of the Galaxy Vol. 2.”

“Homecoming,” directed by Jon Watts, has been as well-received as those films, currently holding a 91 percent rating on Rotten Tomatoes. Only the first “Avengers” and “Iron Man” films have posted a higher Tomatometer rating in the MCU canon.

“Spider-Man: Homecoming” takes place a few months after the events of “Civil War,” with Peter Parker returning to his double life as a high school student and neighborhood crime fighter in Queens, but yearning for another taste of the Avenger life that he experienced while fighting alongside Iron Man.

He hopes for the chance to prove he’s worthy of being a full-time Avenger, but gets more than he bargained for when he discovers a blue-collar weapons dealer named Adrian Toomes (Michael Keaton), who is selling deadly weapons made from alien technology taken from the Avengers’ first battle in New York.