That’s right folks, it’s going to be a trilogy, with Part Two coming sometime down the road.

You can watch the first look, which sees Miles Morales run into Spider-Man 2099 (and some nifty new animation) after an adorably cute reunion with Gwen Stacey, in the video above. 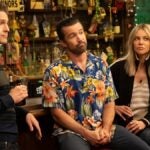 Also Read:
Why ‘It’s Always Sunny in Philadelphia’ Brought Up Prior Blackface Controversy in Season 15 Premiere

Returning as producers on the new “Spider-Verse” are Phil Lord, Chris Miller, Amy Pascal, Avi Arad and Christina Steinberg. Alonzo Ruvalcaba will co-produce. Lord and Miller will also be credited as writers on the film, along with David Callaham.

The sequel will be directed by the trio of Joaquim Dos Santos, Kemp Powers and Justin K. Thompson.

The original “Spider-Verse” film from 2018 was critically acclaimed for its animation style and story, which followed Shameik Moore as the voice of Miles Morales, who becomes the next Spider-Man and recruits the help of a lazier Peter Parker from another universe along with an array of other Spider-Men and even Spider-Pigs. Additional voice cast included Jake Johnson, John Mulaney, Nicolas Cage, Mahershala Ali, Chris Pine, Brian Tyree Henry, Kimiko Glenn, Kathryn Hahn, Liev Schrieber and Hailee Steinfeld.

Issa Rae stars in the sequel as Jessica Drew aka Spider-Woman. Oscar Isaac voiced the futuristic Spider-Man 2099 (also known as Miguel O’Hara) in the end-credit scene from the first movie.

The trailer comes a few weeks before the release of “Spider-Man: No Way Home,” which coincidentally deals with Peter Parker (Tom Holland) and Doctor Strange (Benedict Cumberbatch) accidentally breaking open the multiverse and unleashing past villains from Sony’s old “Spider-Man” movies. Sony is producing “No Way Home” with Marvel Studios.