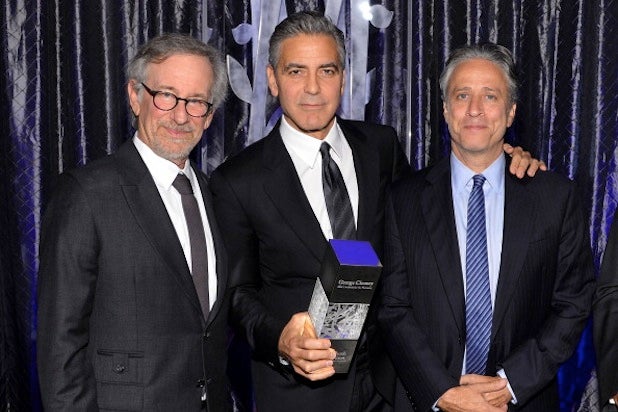 Steven Spielberg, founder of the USC Shoah Foundation, came to New York City recently to bestow its Ambassador for Humanity award to actor George Clooney at the Museum of Natural History. The evening demonstrated how these two Hollywood personalities deserve kudos for caring more about the world’s atrocities than the weekly grosses at the box office.

The presentation started with Sandra Bullock, who was in the Big Apple opening of “Gravity,” teasing Spielberg about not casting her in “Jurassic Park.” Seemed an appropriate reference in a museum full of dinosaur models.

Then she went on to make humorous remarks about “Gravity” co-star Clooney being above the Earth’s hemisphere as well as lauding him for “keep on doing good.” Most of all she emphasized how the Shoah Foundation brings a “message of hope.”

After Bullock came comedian Jon Stewart, who showed up after taping his nightly humorous take on the world. He quipped, “As a Jew there is nothing as sacred as being here on the Upper West Side” that his mother reminded him was “near Zabar’s. ”

The comedian, who just directed his first film over the summer, went on to compliment the Shoah Foundation’s lofty purpose. Although its original goal was to record the memories of Holocaust survivors — 52,000 to date — the foundation has gone on to chronicle the genocides in Africa and around the world.  Its motto is “hear their voices and never forget.”

Among the stars in attendance were sorely missed TV comedian Jerry Seinfeld and long-lasting “SNL” producer Lorne Michaels, who have brought us laughs for years. As both live down the street from the museum on Central Park West they did not have far to travel for the dinner.

Coming from California was Spielberg’s trusted co-producer Kathleen Kennedy, now running Lucasfilm. The purpose of the dinner was the foundation’s campaign goal of raising $150 million over five years

The press release for the event explained why the Academy Award-winning director of “Schindler’s List,” which came out 20 years ago and provided the financial basis for the Shoah Foundation, honored Clooney.

“George’s leadership as a human rights advocate and activist has shed light on humanitarian crises across the globe,” said Spielberg. “His efforts around genocide awareness and prevention link closely with the mission of the USC Shoah Foundation, and I am honored to have this opportunity to recognize George as an Ambassador for Humanity. By speaking out for those whose voices might otherwise go unheard, George has been a beacon of hope, exposing crimes against humanity and advancing peacemaking through advocacy and action.”

At the dinner Spielberg observed that Clooney is motivated by the belief that to “speak up” is so important. The humble humanitarian Clooney was modest in his acceptance speech as well as explaining his dedication to the purposes of his political work. The actor thanked Spielberg for giving him his first big break on the medical television show, “ER.” Clooney emphasized the importance of speaking out about human rights because it’s harder for “bad things to happen in bright lights.”

Lovely singer Norah Jones’ gentle rendition of “Come Away With Me” was the appropriate evening’s entertainment. The actor complimented Jones on being a “singer’s singer,” much like his aunt, the late Rosemary Clooney. The audience applauded in agreement.

Also admirable is how Spielberg’s alma mater USC has embraced the project and put so much in pulling off the evening. Members of the administration spoke.

What the accolades of the night proved is that the charming actor, like the very talented and successful Spielberg, could rest on his Hollywood laurels and just pursue his career. But instead they want to make a difference in the world, especially to counter the indifference toward human rights violations.

The evening had special cadence for myself and dear friend film professor Dr. Annette Insdorf, author of the valuable book, “Indelible Shadows: Film and the Holocaust,” who was also in attendance. As children of Holocaust survivors, we have devoted our careers to documenting the past. We both were most impressed about how the evening embraced the memories of our parents.

I know that my mother, who was always reluctant to talk about the war, only did the interview because Spielberg, a director she so admired, had started the Shoah Foundation. Now that she is no longer alive I will be forever grateful for his wise insight to document the past to help prevent future genocides. Her testimony is the only record we have of her wartime experiences

And Spielberg said it best at the dinner about why they do this documentation and especially work with the younger generation. He asserted, “So the next generation will not let it happen again.”