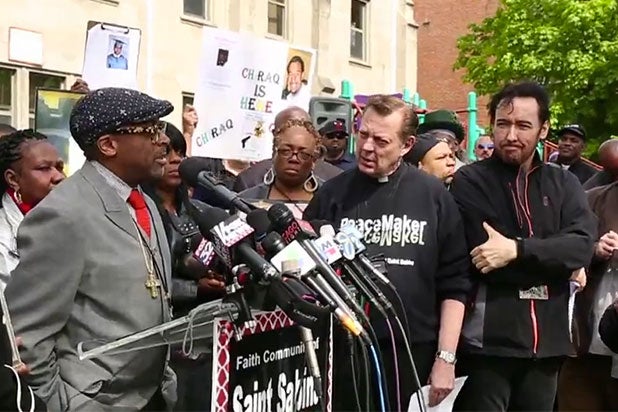 Spike Lee is firing back at critics of his upcoming movie “Chiraq” with guns blazing.

The film about gun violence in Chicago, whose title merges the city’s name with “Iraq,” has been criticized by local politicians, including Mayor Rahm Emanuel, for allegedly likening the city to a war zone.

In a news conference Thursday in Chicago, Lee defended the title as he stood next to residents holding photos of loved ones killed by gun violence.

“A lot of people have opinions about the so-called title of the film, again, who know nothing about the film,” the Oscar-nominated director said. “Wait until the movie comes out. You don’t like it, you don’t like, but wait, see it first.”

“This is not a joke. This is not a game,” he added. “This is real life and death and that’s the way we’re going to approach this.”

The movie is set to highlight the growing violence in Chicago, and “Chiraq” is a slang term used by some to reference the city, which has been in the news for its shocking crimes.

Lee insists he will give the film the proper treatment. “People acting like you’ve never seen none of my films! Like, I just got pulled off the street,” he said. “I’ve been doing this since 1986.”

As TheWrap exclusively reported, “Chiraq” is set to star Samuel L. Jackson, as well as Illinois natives Jeremy Piven and Common. Kanye West had previously been linked to the film, but is no longer attached. Chicago-born Jennifer Hudson and John Cusack have also been added to the cast.

Cusack, who was born in Evanston, joined Lee on Thursday. “I am 100 percent sure that the great city of Chicago can survive a film of conscience, just like it did ‘Transformers,'” the actor said. “I love my city of Chicago — all of Chicago,” he said, “and I would never do anything to hurt it. I’m very proud to be in this film.”

Cusack also fired back at some of the city’s politicians.

“Speaking personally, there really is no controversy around this film except for a bit of a manufactured political controversy,” he said. “A few people say it’s controversial and the press repeats it, but controversial to whom? Nobody that I’m talking to here.”

Despite their upbeat assessment, the team behind “Chiraq” still faces challenges. Last week, Chicago alderman William Burns encouraged the City Council to urge the state to deny Lee’s company a $3 million tax break for shooting the film in Illinois if he doesn’t change the title of the movie.

However, there has been support from some community members, including Chicago Bulls player Joakim Noah. In a previous statement, Noah said the title can be “perceived as a glorification of violence, but the reality of what’s happening in the city of Chicago is not something any of us should hide from.”

Before Thursday’s gathering, Lee had not spoken publicly about the film and little was known.

“Chiraq” is being produced by Amazon studios and is set for release in 2016.

Watch the video of the press conference as posted by the Chicago Tribune and WGN below.