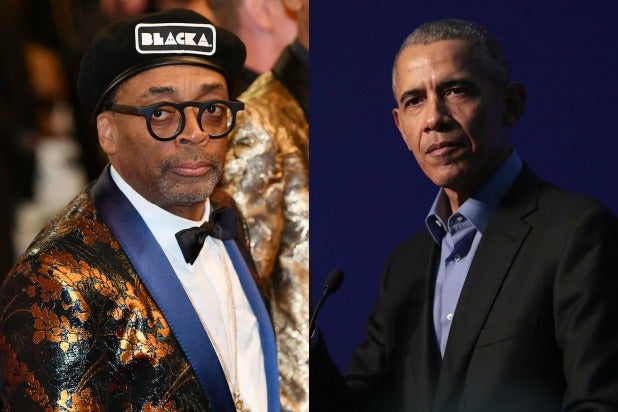 It turns out, “BlacKkKlansman” director Spike Lee is the one who informed President Barack Obama of the deadly violence that took place in Charlottesville, Va. last year.

Lee’s latest film, which tackles white nationalism and its poisonous rhetoric, hits theaters Aug. 10, nearly a year to the day after white nationalist groups and counter protestors clashed in Charlottesville.

The events involved the death of 32-year-old Heather Heyer and shone a light on the resurfacing racial tensions in America since the election of President Donald Trump.

The “Unite the Right rally” came just after the halfway point in Trump’s first year in office, and the president later defended the white nationalist groups, saying there were “very fine people on both sides.” Obama, meanwhile, had been vacationing in Martha’s Vineyard, where, according to a Time magazine piece, the former president hadn’t heard about the deadly rally until Lee told him about it on the the 18th hole of a golf course — which happens to be in Lee’s backyard.

Lee had spent the morning, like many Americans, glued to the television. After seeing news from the counter-protest, Lee, taking a break from the coverage, went out to the 18th hole, in his backyard, where he saw Obama’s Secret Service agents. Lee says he then walked up to Obama. “I said, Mr. President, did you hear what happened in Charlottesville? He hadn’t.” So Lee told him. “I could see on his face–that shock. It was Aug. 12, year of our Lord, 2017.” (A spokesperson for Obama declined to comment.)

Following the rally and violence — and Lee bringing it to his attention — Obama tweeted a response that, at the time, shattered the Twitter record for most likes.

“BlacKkKlansman,” which stars John David Washington, Adam Driver and Topher Grace as Ku Klux Klan Grandwizard David Duke, has gotten rave reviews, with a current Rotten Tomatoes score of 97 percent. The film, based on a true story, won Lee the Grand Prix prize at Cannes Film Festival in May.

The film centers on Ron Stallworth, a black police detective in 1970s Colorado who infiltrated the ranks of and investigated the Ku Klux Klan. (It’s based on Stallworth’s book of the same name.) Its timing and its release — tied to the Charlottesville anniversary — is no coincidence as the film includes footage of Heyer in the rally.

TheWrap’s Steve Pond called the film “quintessential Spike Lee, impassioned and messy and vital as anything he’s done in decades.”

“BlacKkKlansman” is Spike Lee standing up and showing that dammit, he’s still Spike Lee. Which is to say, it’s a crazy story fueled by righteous anger but also leavened by humor — and if it overreaches at times, gets preachy at others and sometimes threatens to go off the rails altogether, it’s also one hell of a ride.