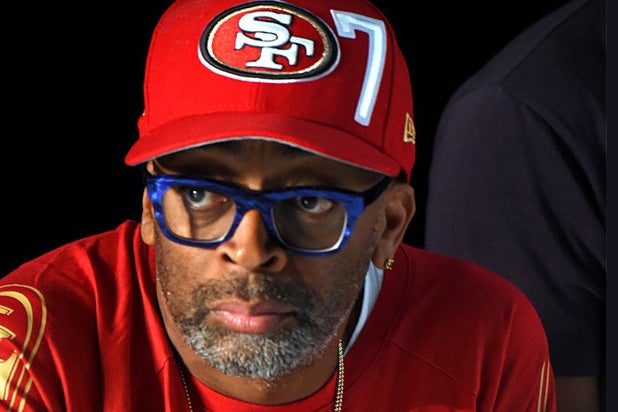 It’s been 31 years since Spike Lee first came to the Cannes Film Festival with “She’s Gotta Have It,” but the rebel yell that that film represented still rumbles at the back of his throat.

He is here this year with a subject no less unsettling: “Rodney King,” a filmed version of a performance piece by the amazing Roger Guenveur Smith, who also wrote it. The film amounts to an hour-long tone poem, a kind of trancelike recitation of the life and death of the man who was videotaped being beaten near to death by Los Angeles police officers and survived to tell the world to “just get along.” (Lee and Smith were honored in Cannes with a special gal presented by luxury concierge service WanderLuxxe.)

“Rodney King” is one of a series films that have come out this spring to mark the 20th anniversary of the L.A. riots, this one focusing on the man whose unjust fate lit the fuse that sparked a thousand other unjust fates.

Lee sat on the back of a yacht in the Cannes harbor and talked about progress, or lack of progress, in the battle against racial hatred. “On the day that Barack Hussein Obama put his hand of Abraham Lincoln’s Bible, many people felt on that historic day that we were entering a postracial society,” said Lee. “I didn’t go for that bullsh– one second. I wasn’t buying it. Not for a millisecond.”

So Lee now feels he was the more realistic among us. “No way did I think by a magical, mystical act of God that racism would not exist anymore. That was science fiction. History has final say, and look where we are now.”

Where we are, of course, is the inescapable reality of continual police shootings or other assaults on African-Americans who have posed no serious threat to them. And the invective that has been loosed by the era of Donald Trump, whom Lee refers to as “Agent Orange.”

“I wake up every day thinking he has the nuclear football,” said Lee. “This is real.”

So what is Lee’s path given the country current state? “I gotta do the best I can,” the filmmaker said. “Be about goodness and truth. Not trying to give easy answers.”

He said he’s working on a film inspired by recent history but refused to give any details. “When I get the financing,” he promised.