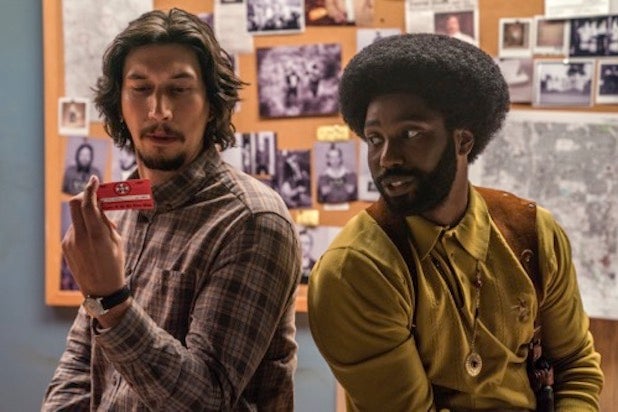 Spike Lee’s “BlacKkKlamsman” mostly won over its well-heeled premiere audience at the Cannes Film Festival, earning and standing ovation and positive reactions on social media. Though reports from the scene say the room was divided with American critics in love, and French critics saying ‘non.’

John David Washington and Adam Driver star in the racially-driven comedy, which recounts the amazing true story of an African American detective who penetrated the ranks of the KKK.

“It’s simultaneously Spike Lee’s most entertaining film since ‘Inside Man and a savvy indictment of Trump-era bigotry right down to the chilling real-life climax,” wrote Eric Kohn of IndieWire.

“‘Blackkklansman’ is the Spike Lee movie we’ve been waiting for,” wrote Rebecca Keegan of Vanity Fair.

Referring to Lee, TheWrap’s own Steve Pond called the film as “impassioned and messy and vital as anything he’s done in decades.”

The Focus Features release is in contention for Cannes’ most prestigious competition prize, the Palme d’Or, though one reporter indicated only American viewers were blown away by the project.

“Twitter reaction from French journalists to #BlackkKlansman is very different. Majority are giving it the thumbs down,” wrote @HollywoodSpin.

Based on a true story, the film takes place in the 1970s and stars Washington as Ron Stallworth, the first black detective to join Colorado Springs’ police department.

Determined to make a name for himself, Stallworth plans to invade the ranks of the KKK as it moves to sanitize its violent rhetoric and go mainstream.  With the help of veteran detective Flip Zimmerman (Driver), Stallworth risks it all for the investigation of a lifetime.

Hot damn, #BlacKkKlansman is electric. It’s simultaneously Spike Lee’s most entertaining film since INSIDE MAN and a savvy indictment of Trump-era bigotry right down to the chilling real-life climax. #cannes18

#Blackkklansman is the Spike Lee movie we’ve been waiting for.

Spike Lee bookends #BlacKkKlansman with news footage from Charlottesville and an upside down image of the American flag that fades to black and white. Incredibly powerful. #cannes

“Brooklyn’s in the house!” — shouts Spike Lee after taking seat inside Palais for world premiere of #BlacKkKlansman (he’s wearing mismatched sneakers and rings that say “love” “hate” across each hand) #cannes2018 pic.twitter.com/UF7iuhRD3N

Also, Twitter reaction from French journalists to #BlackkKlansman is very different. Majority are giving it the thumbs down.

This looks like something Spike would have dropped in the 90s right after Mo' Better Blues. #BlacKkKlansman https://t.co/cIcXlFAxQ3