Many people have asked me if my resolve to be an actor was diminished after I broke my neck five years ago. If anything, it strengthened.

The summer after my freshman year of college I worked as a counselor at a summer camp in Maine. On a day off, a bunch of the counselors went on a canoe trip down a river. When a group of us pulled off to the side of the river for a break, a friend and I were playing around in the water. He flipped me up over his shoulders, and I hit the bottom. 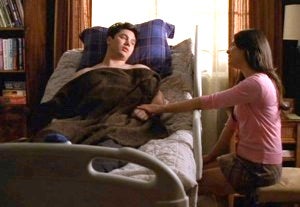 I broke my neck, shattering the C4 through C6 vertebrae. Maybe there was a rock that I hit, maybe it just wasn't as deep as he thought, who knows. I was conscious the whole time. I was lucky that we were all camp counselors, because three of the people who saw it happen were lifeguards. They stabilized me and I was rushed to the hospital.

The tale of my physical recovery is a story for another time. The tale doesn't end with me getting my body back. I have function through C6. That basically means that I'm paralyzed from the upper chest down. My shoulders, biceps and forearms up to my wrists work, but I don't have use of my hands or triceps.

I took a year off from school. When I returned to Skidmore College, a small liberal arts school in upstate New York, I kept my theater major. I graduated from Skidmore in May 2009 and went out to Los Angeles to pursue an acting career.

I've done all right so far: I have a guest-starring role on Tuesday's episode of “Glee.”

The part that I'm playing was written as a character with a spinal cord injury very similar to mine. In a blog post for the Christopher Reeve Foundation, I wrote about how I got the part. Here, I'm going to write what I'm able to say before the show actually airs about my day on set.

I was told to be on the set at 11 o'clock in the morning. When I got there, I had my own trailer waiting for me. It was a Winnebago with a wheelchair lift. I got my makeup done in the trailer, changed into my costume and went to the set for rehearsal.

I'm in two scenes in the episode. The first is with Finn and Rachel, played by Cory Monteith and Lea Michele. We met, and about 30 seconds later jumped into rehearsal. We rehearsed the scene a couple times before the director got what he needed in terms of understanding where to set up the cameras, and then we took a break while everything got set up.

Aside from one commercial that I filmed, this was my first professional acting job. Other than one class in college on film acting, I had never acted for the camera before. All of my training was theater training, so it was a very interesting experience gearing up for performance mode after such little rehearsal time.

When we started filming I quickly realized how well my theater training prepared me for a long day of shooting. Doing take after take after take is basically like being in constant rehearsal.

"Lunch" took place at about 6 o'clock, so it was really dinner. The day that I was filming was the same day that they were shooting the remake of the “Vogue” video. Everyone at dinner was wearing cool, lavish costumes. I wore sweatpants for my part.

After lunch/dinner we filmed my second scene. Pretty much all of that scene is between my character and Rachel. We sing together in that scene — and that was where I started to feel the nerves.

I'm a pretty good singer, but I don't have the greatest ear, and there were a few takes where I had trouble staying in tune. Randy Jackson would've been calling me pitchy (yes, I'm an “American Idol” fan, too). I think I ended up doing it well, but my one paranoia is that they are going to dub over my singing voice.

If they do, my ego would be able to take it. It would just be nice to know that I was able to give them everything they wanted for the part.

Everyone on set was fantastic, and it was amazing to get to work with them. Cory and Lea are really cool, and obviously very talented. The crew was helpful, hard-working and treated me well. The director of the episode, Alfonso Gomez-Rejon, was down to earth and great at guiding us through the scenes and including us in his vision.

It took 12 hours to shoot about five minutes of screen time. They were 12 of the most important hours of my life. I mentioned earlier that my resolve to be an actor got stronger after I had my accident. It got stronger because, as cliché as it sounds, I came face to face with how short and fragile life is.

I would be wasting time and doing myself a terrible disservice if I didn't wholeheartedly pursue what I love doing. Being cast in this show, even though it's only five minutes on one episode of one television show, has validated for me that I can do this. The greatest moment for me throughout this entire experience wasn't that I was able to tell people that I'm on “Glee.”

It wasn't meeting famous people. It wasn't having my own trailer (although that was really cool). It was in those 20-minute stretches of time that day when I was filming those scenes. The scenes are extremely well written. There isn't a greater high for me than what I was feeling when I was able to be completely invested in those moments.

Zack Weinstein is an actor in Hollywood. He is also an ambassador for the Christopher Reeve Foundation. You can see his most recent work as a guest star on Fox's "Glee." Visit his website at www.zackweinstein.com.

Zack Weinstein is an actor in Hollywood. He is also an ambassador for the Christopher Reeve Foundation. You can see his most recent work as a guest star on Fox's "Glee." Visit his website at www.zackweinstein.com.