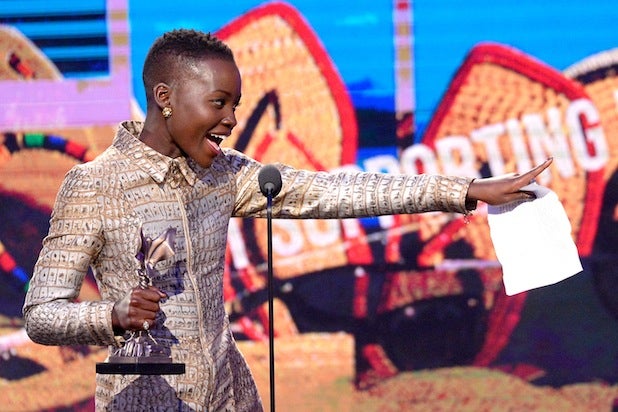 The only other film to win more than one award was “Dallas Buyers Club,” which won for lead actor Matthew McConaughey and supporting actor Jared Leto.

“12 Years a Slave” is locked in a tight battle with “Gravity” and “American Hustle” for the top Oscar, but neither of those films were eligible for at the Spirit Awards, which are open to movies made for budgets of less than $20 million.

The drama’s triumph in a zero-“Gravity” zone was expected, as Spirit Awards voters in recent years have typically gone for the most high-profile Oscar contender on the ballot.

In his acceptance speech at the end of the night, McQueen focused on the two “Slave” actors who did not win, Michael Fassbender and Chiwetel Ejiofor.

In the lead acting categories McConaughey and Cate Blanchett continued their sweeps through awards season, winning the Best Female Lead and Best Male Lead awards just as they’d won most of the preceding awards over the past month.

McConaughey is considered the likely Oscar winner for his performance as Ron Woodruff, a Texas electrician who became a reluctant crusader in the battle against AIDS, while Blanchett is the prohibitive favorite for her performance as a pill-popping, alcoholic divorcee in Woody Allen’s “Blue Jasmine.”

In an eloquent speech, Nyong’o said she realized after taking an independent film class in college that “independent film is where stuff actually happens — stuff that matters.”

“Fruitvale Station” won the award for Best First Feature, with director Ryan Coogler drawing a standing ovation with his emotional speech pointing out other cases similar to the one depicted in his film, in which a young, unarmed black man was gunned down by transit police in Northern California.

Bob Nelson won the Best First Screenplay award for “Nebraska,” which he wrote about 10 years ago while working in television in Seattle.

“Blue Is the Warmest Color” won the award for the best international film, and “20 Feet From Stardom” was named best documentary.

The John Cassavetes Award, which goes to an ultra low-budget film, went to Chad Haritgan for the understated study “This Is Martin Bonner,” which Hartigan said was made for $42,000.

The show was hosted by Patton Oswalt, whose opening monologue drew a few groans and very little laughter.

The show will air on IFC Saturday night at 10 ET/PT.

Also read: Oscar Week Parties: The Scene Before the Show

Here is the list of nominees. Winners indicated by *WINNER.

Best Documentary:
“20 Feet From Stardom”  *WINNER
“After Tiller”
“Gideon’s Army”
“The Act of Killing”
“The Square”

Best International Film:
“A Touch of Sin”
“Blue Is the Warmest Color”  *WINNER
“Gloria”
“The Great Beauty”
“The Hunt”