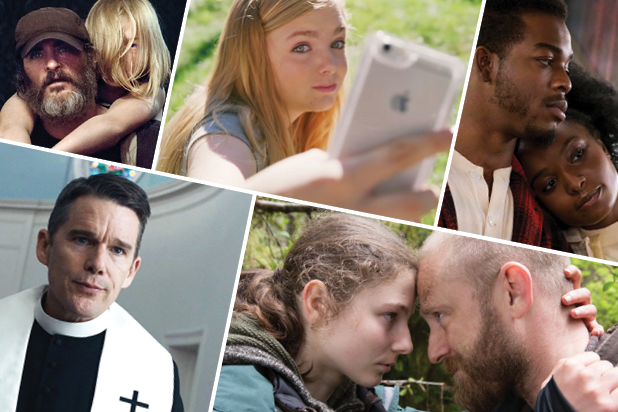 Saturday’s Film Independent Spirit Awards has a host, Aubrey Plaza, and will no doubt use that fact as a way to poke fun at their bigger competitor, the hostless Academy Awards.

But that’s far from the only way that the Spirit Awards will distinguish themselves from the Academy Awards during their afternoon shindig on the beach the day before the Oscars.

More than in most recent years, Saturday’s Spirit Awards won’t be an out-of-town tryout for Sunday’s Oscars, looser and less consequential but honoring many of the same films.

Instead, this year’s Spirit lineup offers a real alternative to the Oscars. The Spirits’ five Best Feature nominees, for instance, were all overlooked by the Oscars in the Best Picture category: Bo Burnham’s “Eighth Grade,” Debra Granik’s “Leave No Trace” and Lynne Ramsay’s “You Were Never Really Here,” none of which received a single nomination from the Academy, plus “First Reformed,” which got one, and “If Beale Street Could Talk,” which got three.

Those are five exceptional films that can hold their own against the Academy’s lineup, and they make a case for what the Spirit Awards should be: not the baby brother to the bigger, glitzier show across town the next day, but a true alternative. Recognizing the heart and quality of “Leave No Trace” or “First Reformed” or “Beale Street,” after all, is a far worthier achievement than serving as just one more precursor award on the road to the Dolby Theatre.

That’s what the Spirit Awards were in their early years, when they gave their top award to “Sex, Lies and Videotape” instead of “Driving Miss Daisy,” “Pulp Fiction” instead of “Forrest Gump,” “Fargo” instead of “The English Patient.”

In the first 20 years of their existence, the Spirit Awards nominations in the Best Feature category included a grand total of six films that would also be nominated for the Best Picture Oscar, and only one, “Platoon,” that won both awards.

The best-pic streak came to an end last year when “Get Out” won the Spirit Award and “The Shape of Water” took the Oscar — and it definitely won’t start up again this year, since for the first time in 10 years, none of the Spirits’ Best Feature nominees are in the running for the top Oscar.

Sure, a handful of Oscar nominees are sprinkled through the rest of the Spirit Awards categories. With Glenn Close, Regina King, Richard E. Grant and Adam Driver in the acting categories, the Spirits and Oscars could easily end up with a couple of overlapping winners. “Can You Ever Forgive Me?” is nominated for screenplay, while the documentary category contains Oscar nominees “Minding the Gap,” “Of Fathers and Sons” and “Hale County This Morning, This Evening” and the international-film category includes “Roma,” “Shoplifters” and “The Favourite.”

(At the Spirit Awards, a film can qualify as foreign even if it’s in English, as “The Favourite” is.)

Oh, and here’s one more way they’re different from the Oscars: While the Academy tried but failed to move four categories, including cinematography, into the commercial breaks, the Spirit Awards have been doing that for years without causing a fuss.

Last year, for instance, “Call Me by Your Name” won the Spirit Award for cinematography before the live broadcast on IFC even began — and the fact that it did so without raising the kind of stink that greeted the Academy’s proposed move is perhaps a sign that the stakes are lower and the passions less inflamed when it comes to Saturday afternoon on the beach v. Sunday night in Hollywood.

But if the Spirit Awards do their job right, the winners won’t be any less worthy.