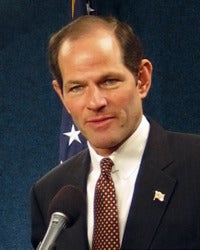 CNN, which has long resisted the opinion-based programming that reshaped cable news — and is tanking in the ratings because of it — announced a change in course Wednesday:  it is launching a roundtable show hosted by Eliot Spitzer and Kathleen Parker.

Spitzer, the disgraced-cum-rehabilitated former governor of New York, and Parker, the conservative columnist, will serve as ideological sparring partners for the show that will air weeknights at 8:00 p.m. Eastern, the hour before Larry King.

Jon Klein, CNN's president — who has stubbornly resisted opinion programming for fear of tainting its reputation as a "news leader" — described the new show like this: "Other cable news channels force-feed viewers one narrow, predictable point of view; in contrast, CNN will be offering a lively roundup of all the best ideas — presented by two of the most intelligent and outspoken figures in the country. Eliot and Kathleen are beholden to no vested interest — in fact, quite the opposite: they are renowned for taking on the most powerful targets and most important causes."

"As a veteran print journalist, I am appropriately respectful of the challenges posed by the medium," said Parker.  "But I'm thrilled by the opportunity to discuss the issues that matter to me — and that aren't heard often enough on television." With Spitzer, she added, "it can't possibly be boring."

Spitzer's statement: "I am grateful to CNN for the opportunity to co-host a show that will advance the discussion of the defining issues of our time."

Whether the formula works ratingswise remains to be seen. The show will replace Campbell Brown, who decided to step aside because of her prolonged ratings struggles.