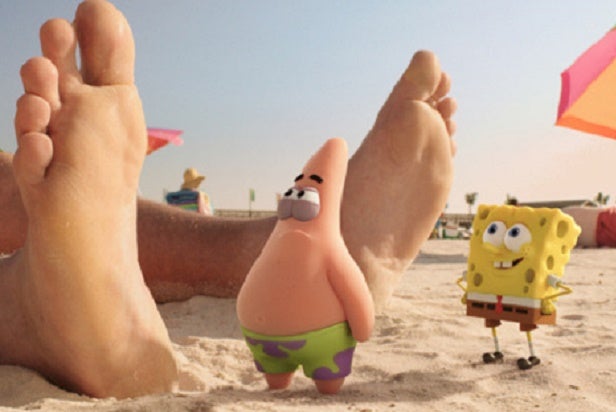 The pineapple-dwelling yellow fellow turned the box office into his personal playground this weekend, as “The SpongeBob Movie: Sponge Out of Water” surprised Hollywood with an eye-popping $55 million debut.

Paramount Pictures’ animated sequel based on the long-running Nickelodeon TV kids show knocked “American Sniper” out of the No. 1 spot for the first time since the Iraq War drama went into wide release a month ago. The opening was roughly $20 million over analysts’ projections, and it spoiled the coming-out parties for Andy and Lana Wachowski’s space opera “Jupiter Ascending” and the fantasy epic “Seventh Son,” two movies conceived as blockbusters that have spent the last few years awaiting release.

Both finished behind “American Sniper,” which brought in $24.1 million and lifted its domestic total after four weeks to $282 million for Warner Bros. The Clint Eastwood-directed war drama starring Bradley Cooper became the third-highest grossing movie released in 2014. Only “The Hunger Games: Mockingjay – Part 1″ ($335 million) and Disney’s “Guardians of the Galaxy” ($331 million) are ahead of “Sniper,” which counts Best Picture, Actor and Adapted Screenplay (Jason Dean Hall) nods among its six Oscar nominations.

“Jupiter Ascending,” starring Channing Tatum, Mila Kunis and Eddie Redmayne, brought in $19 million over the three days, right around what Warner Bros. had hoped for. But it still makes it three straight  misfires for the Wachowskis, because the original sci-fi tale they wrote, directed and produced cost $175 million. They haven’t had a moneymaker since 2003’s “The Matrix Reloaded,”and their last two, 2008’s “Speed Racer” and 2012’s “Cloud Atlas,” had big budgets too.

“Seventh Son,” starring Ben Barnes, Jeff Bridges and Julianne Moore, fell on its sword with a $7 million three-day debut. That was at the low end ofv erylow expectations for the $90 million fantasy epic and gives Legendary Pictures its second flop in a row. The company that financed the “Dark Knight” and “Hangover” franchises has missed with the first two films it’s released since moving its production deal from Warner Bros. to Universal Pictures. The $70 million cyber thriller “Blackhat” tanked last month.

The big showing by the PG-rated “SpongeBob” was way over projections of analysts and the studio, who had predicted a debut in the $35 million range. It did it by connecting with teens and adults as well as kids, drawing an audience that was split evenly with 50 percent under the age of 18 and 50 percent over. That’s the ame formula that “The LEGO Movie” used on this weekend last year as it headed to a $69 million debut for Warner Bros., the only February opening for an animated film better than “Sponge Out of Water.”

“SpongeBob” has muscled up in the decade since he was last seen on the big screen. “The SpongeBob Squarepants Movie” opened to $32 million in November of 2004 and went on to take in $140 million worldwide. The sequel could double that total, especially since it will have the benefit of 3D premiums. It brought in $16.2 million overseas this weekend, having taken in $28 million abroad, five times the original’s haul in comparable markets.

Domestic moviegoers, made up of many date-night couples, gave it a “B” CinemaScore, in line with its 75 percent positive Rotten Tomatoes score.

“That’s a tough group to attract with an animated movie,“ said Meghan Collison, president of worldwide distribution and marketing at Paramount, “but we crushed it with the Saturday night shows.”

Also Read: ‘The SpongeBob Movie’ Review: Swims in Silliness, Even on Dry Land

While not committing to a sequel Sunday, she called it “a good bet,” and said that Nickolodeon deserves a lot of credit for how it has managed the SpongeBob brand.

“They’ve taken a TV show that people love and infiltrated it into the culture so many ways you don’t even notice, like even some of Katy Perry’s looks, and I think we benefited from that.”

Antonio Banderas, Tom Kenny, Clancy Brown and Rodger Bumpass were among the voices in the $74 million film produced by Paul Tibbitt and Mary Parent.

“Jupiter Ascending” was envisioned as a franchise when development began at Warner Bros. back in 2009. Special effects work, marketing tweaks and a series of changed release dates all contributed to the holdup on its rollout.

The critics didn’t find “Jupiter Ascending” worth the wait and it was at 22 percent on Rotten Tomatoes. Audiences skewed male (57 percent) and older (82 percent over the age of 25) and gave it a weak “B-“ CinemaScore.

“Jupiter” was on 334 IMAX screens and they delivered $2.2 million, or 11.5 percent of its domestic grosses. The 3D space opera is expected to do better overseas, and it’s off to a fast start. “Jupiter Ascending” was the No. 1 movie internationally this weekend, opening with $32 million from 65 markets.

Also Read: ‘Jupiter Ascending': 9 Terrible Reviews That Might Knock the Sci-Fi Movie Out of Audiences Orbit

Legendary was still partnered with Warner Bros. when it launched “Seventh Son,” the fantasy epic based on Joseph Delaney’s novel “The Spook’s Apprentice.” Post-production work kept it from making its original February 2013 release date, and when Legendary was leaving Warner Bros., it was shelved again. Universal took over the rollout in 2013, and pushed it from January 2014 before settling on this weekend.

“Seventh Son” received a “B-” CinemaScore from its audience, which was 61 percent male and 53 percent over the age of 30. Its dismal 11 percent positive rating on Rotten Tomatoes had to hurt the fantasy epic, which was directed by Sergie Bodrov and co-starring Kita Harrington and Alicia Vikander.

The Weinstein Company’s “The Imitation Game” is the only Best Picture Oscar contender besides “American Sniper” in the top ten this weekend. The historical drama starring Benedict Cumberbatch took in $4.7 million to raise its domestic total to $75 million in its 11th week in release. That’s just a six percent drop from last weekend, impressive since TWC cut it back by 439 theaters.

Three movies were coming off soft debuts this weekend. Two held up well and finished less than 30 percent down from their openings last weekend.

But things got worse for the R-rated thriller “The Loft,” which brought in $1.3 million for Open Road Films this weekend and missed the top ten.