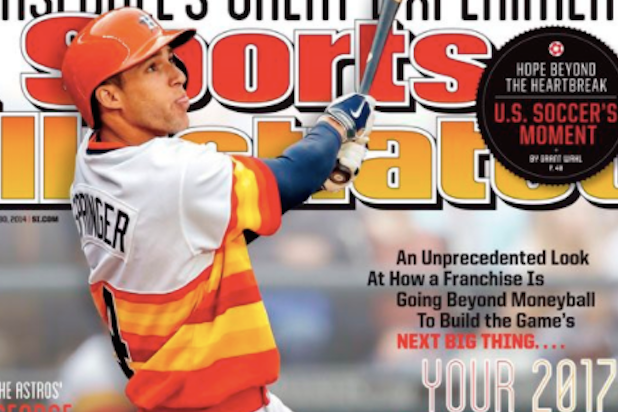 The Houston Astros capped off a thrilling World Series against the Los Angeles Dodgers on Wednesday night, winning the franchise’s first title in its 56-year history with a subdued (for this matchup) 5-1 victory — and in doing so, validating SI’s 2014 cover story proclaiming the ‘Stros the 2017 champs.

Ben Reiter, the SI columnist who penned the story, couldn’t hold back tweeting the cover on Wednesday night. (Can you blame him?)

THE JINX IS DEAD pic.twitter.com/d4OVj1BFcR

Still, SI didn’t stick with Reiter’s bold call, even on the eve of the 2017 championship: Eight out of nine writers picked the Dodgers to win the series before it started. Reiter was the one scribe still willing to stand by H-Town.

So why did the magazine make such a prediction years ahead of its time? The magazine’s editor-in-chief Chris Stone told USA Today’s “For The Win” writer Ted Berg about it:

“I spoke to Ben and said, ‘What does the future hold for this program? Do you believe in their plan?’ And from what I could understand, he did. To sell it, we needed to say something, so we came up with ‘Your 2017 World Series champions,’ which seemed plausible in light of some other transformations we had seen in the previous decade. Remember how quickly the Rays pivoted in 2008? It didn’t seem implausible that a team with smart people running it, with a plan, could turn things around in three years.”

Wednesday night’s World Series win was the culmination of Houston’s investment in home-grown talent, with shortstop Carlos Correa and likely American League MVP Jose Altuve helping form one of the best offensive arsenals in MLB history. Oh yea, and adding ace pitcher Justin Verlander and his fiancé Kate Upton at the trade deadline didn’t hurt, either. I’m now obligated to include an Instagram picture of Upton cheering on the Astros.

It was a long way back from baseball hell for the Astros, who were drawing a 0.00 Nielsen rating only four years ago due to their dreadful play. Now they can blast all the Geto Boys and Travis Scott they want, because they’re the champs. The city announced on Thursday morning it’ll hold its championship parade on Friday afternoon.

(If you got through this entire post without thinking it was written by an emo Dodgers fan, mission accomplished.)