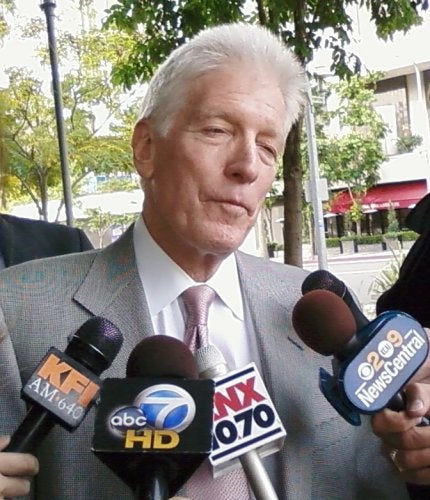 Frank and Jamie McCourt’s high-powered lawyers had come to Superior Court Tuesday morning to poke through the mess of the wealthy couple’s pending divorce trial — but sports seemed to be the only thing on people’s minds.

L.A. Dodger owner Frank’s attorneys had previously pointed out that an earlier-set court date to decide lawyers’ fees, April 5, was a nonstarter because it was opening day of the 2010 baseball schedule and could potentially disrupt Dodgers’ season.
One of Jamie’s lawyers, Bruce Cooperman, wasn’t buying it.
“Mr. McCourt fired his CEO (Jamie) and 18 other people,” said Cooperman. “That’s disruptive.”
Cooperman’s firm partner Dennis Wasser (pictured) did not wait long to chime in.
“There has been game-playing in these proceedings,” Wasser said, “and it’s not been baseball. It’s been hide-and-seek or hide-the-ball.”
“Is he playing to the court or to the gallery?” shot back one of Frank’s lawyers, Sorrell Trope, before further observing of Wasser: “He’s not in the batter’s box — he’s in left field.”
In accusing the Dodger owner of pleading poverty and of not being forthcoming with his financial records, Wasser ascribed to Frank a condition heretofore unknown in dugout or locker room.
“Mr. McCourt,” Wasser said, “suffers from RAIDS — Recently Acquired Income Deficiency Syndrome.”
One major league bone of contention today was when to hold the trial that will decide the validity of a “post-marriage agreement” the McCourts had signed years ago spelling out who owned what part of the Dodgers.
Trope and co-counsel Marc Seltzer were holding out for early February or early March. Wasser, however, was acting like Mr. October, pressing Court Commissioner Scott Gordon for a date deep into autumn of next year.
Gordon set the trial dates, instead, for May 24 through June 3. The commish didn’t exactly knock the ball out of the park with that decision, as far as both sides were concerned, but then, it’s not an umpire’s job to be popular with the players.
x
Looks like you're enjoying reading