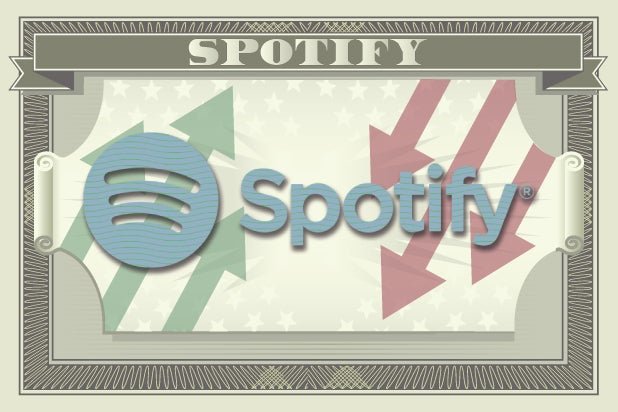 Despite posting subscriber growth in line with projections, Spotify dropped more than 9 percent after reporting its first earnings as a public company on Wednesday due to bigger-than-expected losses.

For the three months ended March 31, Spotify pulled in €1.14 billion (about $1.36 billion) in revenue, matching analyst estimates. But the Stockholm-based company posted a loss of €1.15 a share — quadrupling Wall Street estimates of €0.23 a share. Spotify reported a net loss of €169 million (about $201.8 million) for the quarter — barely reducing its losses from €173 million a year prior.

Investors didn’t want to hear it, with shares trading down 9 percent to $153.80 a share in after-hours trading. 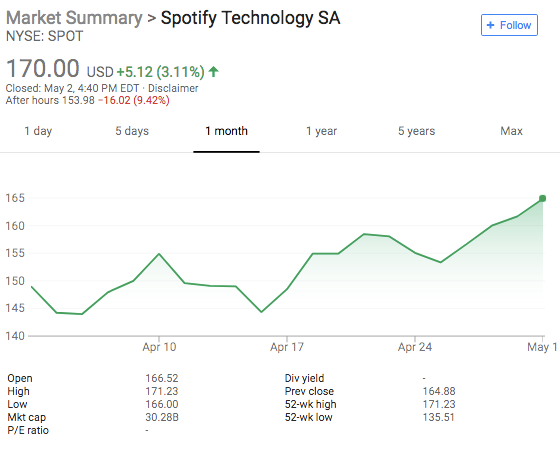 A massive number of streamers might have pulled attention away, but Spotify had already teased it would report between 73 and 76 million paid subscribers before it went public in early April. The company matched those projections, reporting it had 75 million paid subs on Wednesday, and 175 million users overall. Spotify increased its paid subscribers 45 percent year-over-year.

Another issue for Spotify was a sharp decrease in ad-supported revenue. The company pulled in €102 million in ads during Q1, a 22 percent drop from the previous quarter.

Heading into earnings, Wall Street’s concern over its heavy losses — Spotify lost $500 million last year — had been offset, so far, by investor enthusiasm for the world’s largest streaming platform, with shares running from $132 to $170 in the last month. Spotify was paying big money to record companies to keep the hits coming, but had said it would reduce its losses by about 20 percent in 2018. Another concern for investors has Apple Music quickly gaining ground, with the company recently passing 40 million paid streamers — combined with Apple’s cash hoard to throw at new music.

The company will hold a conference call at 5:00 p.m ET to discuss its results.