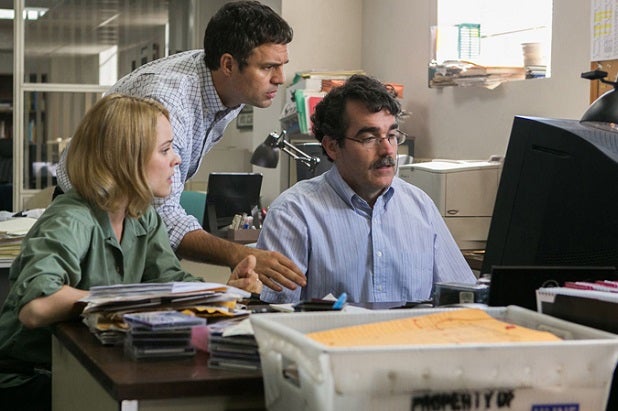 That whooshing sound you heard Sunday morning may have been Open Road Films executives exhaling after checking the box office numbers on their awards hopeful “Spotlight.”

The ensemble drama about the Boston Globe’s coverage of the Catholic Church molestation scandal took in $3.6 million, good for eighth place, after Open Road took an aggressive step in expanding from 60 to 598 theaters in its third weekend.

With no film establishing an early lead in the Oscar race, most distributors are expanding slowly and being careful not to overextend their contenders — particularly since two other awards hopefuls this season, Warner Bros.’ “The Walk” and Universal’s “Steve Jobs,” sputtered when they expanded quickly into wide release.

“Spotlight’s” per-location average was $6,026, better than any movie in top 10 other than “The Hunger Games” finale. The Oscar hopeful is now up to $5.8 million domestically and passed a big hurdle in jumping that many theaters.

“We believe in this movie and think it will speak for itself if we can get it in the right position before the holidays,” Jason Cassidy, Open Road’s chief marketing executive, told TheWrap.

“Carol,” an Oscar hopeful from the Weinstein Company, debuted in four theaters in New York City and Los Angeles, taking in $243,00 for a roughly strong $60,715 per-location average.

The Todd Haynes-directed “Carol” stars Cate Blanchett, Rooney Mara, Sarah Paulson and Kyle Chandler. Set in 1952, it features Mara as a young shopgirl who pursues a relationship with an older, married woman (Blanchett).

“Brooklyn” was another Academy Awards contender taking a jump in theaters this weekend, and it brought in $1.1 million after distributor Fox Searchlight added 88 theaters in its third week, bringing its count to 111. That’s a per-screen average of $1,141.