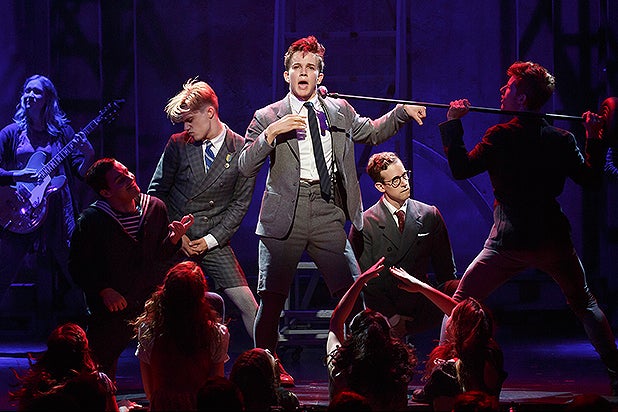 The repressed youth in Frank Wedekind’s much-banned play “Spring’s Awakening” learn how to suffer. Because these kids don’t know much about sex in fin de siècle Germany, they end up homeless, committing suicide, or having botched abortions that lead to their death. None of them, however, goes to a mental institution, the route that Natalie Wood takes in “Splendor in the Grass,” my personal favorite of the genre, because she refuses to have sex with Warren Beatty. Crazy, indeed.

The first Broadway revival of “Spring Awakening,” which opened Sunday at the Brooks Atkinson Theatre, is only the second production from the Deaf West Theatre (together with the Forest of Arden) to arrive on Broadway, the first being “Big River” in 2003. For those unfamiliar with the format, in Deaf West shows hearing actors perform together with deaf actors, with the former often giving voice to the latter.

Well before the end of act one, you find yourself no longer looking for the speaking actor, even though many of the deaf actors in this production do not mime the vocals. And certainly by the end of act two, you’ll wonder why all actors in all musicals don’t use American Sign Language to convey what they’re singing. In this “Spring Awakening,” those hand gestures are as much a part of the choreography as Spencer Liff’s energetic dances.

There does seem to be some design to which young characters are played by non-speaking actors:  Wendla (Sandra Mae Frank, who is beautifully voiced by Katie Boeck),the school girl who dies from a botched abortion; Moritz (the tortured Daniel N. Durant, voiced by the punkish Alex Boniello), the schoolboy who shoots himself; and Ernst (Joshua Castille, voiced by the piano-playing Daniel David Stewart), who is very timid about being seduced by a classmate, Hanschen (Andy Mientus, making absolute arrogance irresistible). Is director Michael Arden saying that deafness is a symbol of these characters’ repression or their naivete? Melchior, the show’s lead male character and the one who deflowers Wendla, is played to great effect by Austin P. McKenzie, who also voices his role and bears an uncanny resemblance to Jonathan Groff, who originated the role. Melchior and Hanschen are the two youngsters who don’t have a repressed bone, or muscle, in their body; and both actors voice their own roles.

Also Read: 'Whorl Inside a Loop' Theater Review: Why White Crime Is Different From Black Crime

Arden is much better when he just mixes things up. Especially inventive are his use of posters, projection of words and silences. Sometimes he shows amazing restraint and creativity, as when Mientus seduces Castille atop an upright piano and Stewart’s piano player swivels around on his chair in silent ecstasy. Much less wonderful is the over-the-top act one finale when Frank and McKenzie finally make it, surrounded by a hallelujah chorus complete with priests and incense.

As for the adults, Russell Harvard, Camryn Manheim, and Patrick Page play a variety of adult villains. Only Marlee Matlin manages to give her roles a modicum of humanity.