With profits down and stores closing, Blockbuster is pinning part of its survival strategy on cellphones, a space that already has one small player up and running — and thus far has no interest whatsoever from rival Netflix.

Hoping more people will have occasion to watch big-screen hits on the tiny screen, Blockbuster has partnered with T-Mobile for an OnDemand movie download service, available on the new HTC HD2 smartphones (pictured). 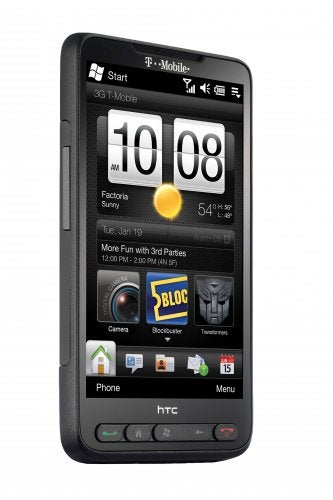 The phone is due to hit stores on March 24, and the company plans to offer a similar service through Motorola smartphones by the end of the year.
"It’s a matter of consumer convenience, however consumers want to watch a movie is where we will position ourselves," Michelle Metzger, a spokeswoman for Blockbuster, told TheWrap.
While watching downloaded movies on iPhones and other smartphones is nothing new, movie rentals via cellphones are something of a frontier.
First on the block was mSpot, which kicked off its service last fall and used its head start to sign deals with some of the major studios, including Universal, Paramount and the Weinstein Company to stream movies over smart phones for a rental fee of $4.99. It expects other studios to sign up in the near future.
mSpot now boasts a catalogue of 600 movies, including newer releases like "Paranormal Activity," "Inglorious Basterds" and "Transformers: Revenge of the Fallen."
While Blockbuster will only be available through a few Motorola and T-Mobile devices, mSpot’s service runs on multiple carriers including AT&T, Alltel, Boost, Sprint and U.S. Cellular. Its service is available on dozens of handsets such as iPhones, Blackberrys, and Androids.
"We’re not looking at mobile phones as replacing 46-inch plasma TVs,"  said Daren Tsui, CEO and co-founder of the small, 67-person company. "But we do see this complementing the big- and home-screen experience." 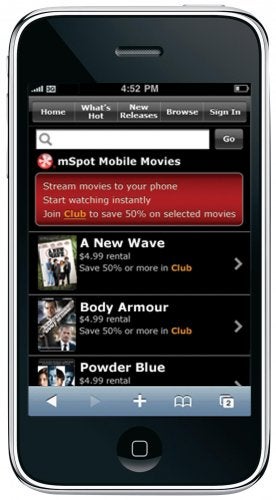 To rent movies, users access the company’s website on their phone, search or browse the catalogue and enter credit-card information.

Rentals are good for one to two days, depending on the film; users can play, pause or restart at will. They can still receive calls and text messages while their film is playing.

Movies can be rented on an á là carte basis for $4.99, or customers can join a three-tiered movie club, which allows them to rent at a discounted rate of roughly $10 for four movies a month. A few releases are free, and only registration is required.

But while mSpot anticipates it will have over 1,000 movies by the end of the year, that pales in comparison to the 10,000 titles that Blockbuster already boasts.

Blockbuster’s pricing will also be á là carte, with older titles renting for $1.99 and new releases renting for $4.99. The company offers movies for sale, for between $10 and $20.

Part of the reason that Blockbuster feels comfortable curtailing its service to just a few phones is it believes that at 4.3 inches, the screens on the T-Mobile phones are big enough for consumers to realistically enjoy watching a feature length film on a mobile device.

As for Blockbuster’s entry into the business, mSpot is publicly remaining sanguine.

"We recognized this trend early and have been experimenting since our launch,"  Tsui told TheWrap. "We’ll keep pushing the envelope so you can expect to see more innovative technology and business models from us.”

For example, while Blockbuster has an iPhone app, it only allows users to browse the company’s catalogue, locate a store and manage their online rental queue, mSpot’s app, which costs $3.99, actually gives users access to a rotating list of feature films that they can watch on their phones — though for now, only in the horror genre.

Though Blockbuster and mSpot are clearly sold on the cellphone business, Netflix — the company whose business model is largely responsible for Blockbuster’s decline — is more circumspect.

"Right now, our members can watch trailers and preview movies on phones, but we just think that people prefer bigger screens, even if we’re talking about laptops,” Steve Swasey, a spokesperson for Netflix told TheWrap. “We want to be ubiquitous across all platforms, but we think whether its watching long-form content or even TV episodes, people just prefer the big screen.”

Like Blockbuster, Netflix offers an app on Nokia smartphones and iPhones that allows users to re-arrange their queue. Swasey said it has no plans to move beyond that.

Even Blockbuster admits that recent advances such as kiosks and cellphones won’t obviate the need for its stores.

"This doesn’t mean we are moving away from our brick-and-mortar business," Metzger said. "Sitting at a computer and scrolling though a list of titles is not as fun as taking your kids to a store and having them run down the aisles looking for a movie."