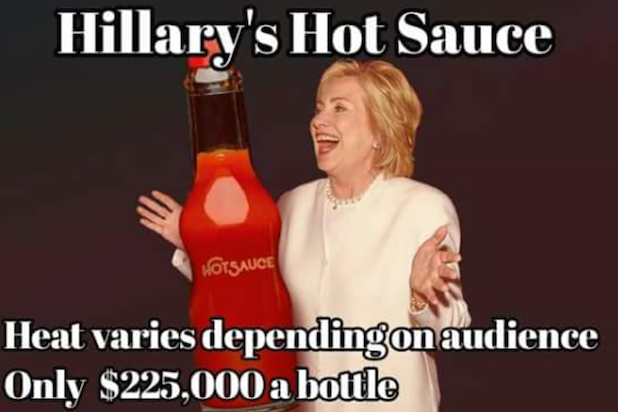 Twitterverse is having a field day after Hillary Clinton told the hosts of a New York City hip-hop radio show that she always carries a bottle of hot sauce in her purse.

Twitter users came up with some pretty funny jabs under the hashtag #HotSauceInHerBag.

“Only $225,000 a bottle,” proclaimed one meme, referring to the former secretary of state’s high speaking fees.

“What’s the verdict on #HotSauceGate?” asked another. “Did it lose its cool since Hillary has had #hotsauceinherbag for decades?”

So how exactly did this so-called “HotSauceGate” start?

During an interview with the popular New York hip-hop radio show “The Breakfast Club” on Monday Clinton was asked by host Angela Yee what is something she always carries with her.

“Now listen, I want you to know that people are going to see this and say, ‘She’s pandering to black people,'” host Charlamagne Tha God told Clinton.

To be fair, in 2012 she told Condé Nast Traveler she always packs “a mini bottle of Tabasco Sauce for adding spice to her meals.”

That didn’t stop some entrepreneurs from seizing on Clinton’s comments, creating a whole line of Clinton hot sauce brand with all kinds of flavors, including “Chipotle Adobo,” “Cayenne Garlic” and “Jalapeño Classic.”

Here is a sampling of some of the #hotsauceinherbag tweets:

What's the verdict on #HotSauceGate?

Did it lose it's cool since Hillary has had #hotsauceinherbag for decades?pic.twitter.com/dxqjW3YFxd

#hotsauceinherbag She loves stereotyping. What if she'd said "I always keep a watermelon in my bag". She can't help but be racist.

Just when I think we've reached peak derp, #hotsauceinherbag comes along to push it to a whole new level.

#HillaryClinton said she keeps #hotsauceinherbag if she wasn't so disgusting I'd b embarrassed 4 her #bernieorbust https://t.co/koDKvmvRUl