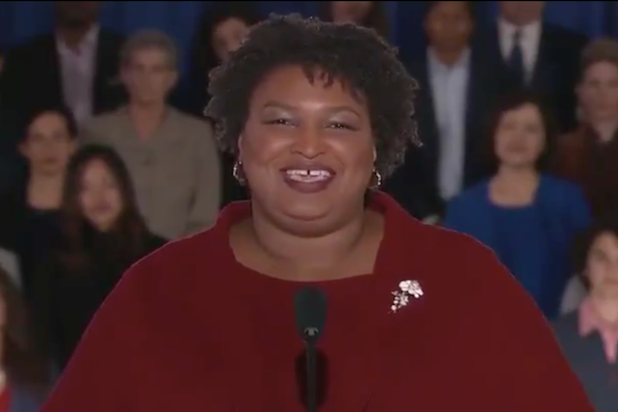 Former Georgia gubernatorial candidate Stacey Abrams gave the Democratic party’s official response to Donald Trump’s State of the Union address on Tuesday, summing up the party’s objections to the president and their vision for a different path forward.

Many online, however, zeroed in immediately on the production values of the moment, which showed a uniquely crisp Abrams at an undisclosed location, standing in front of a blurred-out audience and what looked like solid blue drapes behind the risers. Many journalists and Twitter influencers wondered what the deal was — with some even publicly speculating about the possibility that the party had used a green screen.

Also Read: Trump Gets Surprise Standing Ovation From Alexandria Ocasio-Cortez: 'You Weren't Supposed to Do That' (Video)

“Is this Democratic Response using a green screen or is it just bad lighting?” wondered Tinder co-founder Jonathan Badeen.

A rep for the Democratic National Committee did not immediately respond to request for comment from TheWrap about what may have caused the effect. See more of the bewildered responses from people who watched Abrams’ State of the Union rebuttal below.

… is this green screen

The lighting is horrible for Stacey Abrams. Looks like she's standing either in front of a green screen or rows of ghosts. #SOTU

Is this Democratic Response using a green screen or is it just bad lighting?

Holy shit is that background fake??? Is that a green screen crowd????

Nice rebuttal to #sotu #StaceyAbrams. But can we get a better chroma key on that green screen?!

What is the green screen of awkwardly standing, out of focus people supposed to accomplish?

Is she in front of a green screen? #DemocraticResponse