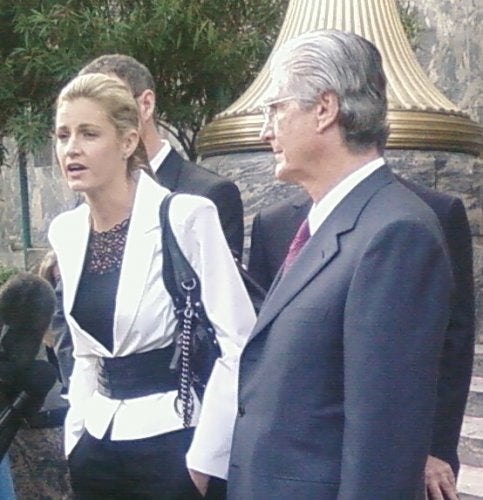 From the number of reporters who’d arrived in federal court today to hear Michael David Barrett plead guilty to secretly videoing a nude Erin Andrews while the ESPN sideline sportscaster stayed at various hotel rooms, you’d have thought they were going to see the videos. Instead, the full house of media reps heard a slightly shaky Andrews make an impassioned plea to U.S. District Judge Manny Real against showing leniency to Barrett.

“I’ve been humiliated and embarrassed,” said Andrews, who, with her father sitting nearby, described Barrett as a sexual predator. “I have to live with it every single day. I’m reminded of it every time I turn on a computer.”
Barrett, 48, was accused of tracking Andrews’ whereabouts across the country by calling the hotels he guessed were housing ESPN crews prior to sports events. Then, on several occasions in 2008, he reserved a room next to Andrews’ and used a camera to shoot inside her room through the door’s peephole.
In 2009 Barrett began posting to the Internet images of Andrews walking around her room naked. The Chicago-area resident’s downfall came when he attempted to sell the footage to L.A.-based TMZ, apparently mistaking the celebrity gossip site for YouPorn.com.
Andrews’ appearance was a rare move – victims usually only make statements at their antagonists’ sentencing hearings. It was undoubtedly a smart strategy by her powerhouse lawyer, Marshall Grossman (pictured with Andrews), as it implanted the distressed voice and image of Andrews in Judge’s Real’s mind months ahead of Barrett’s February 22 sentencing date.
In a post-hearing press conference held on the steps of the downtown U.S. Courthouse, Grossman made it plain that neither he nor Andrews were happy with the government’s decision to accept a plea deal with Barrett.
Assistant U.S. Attorney Wesley Hsu told reporters the feds accepted Barrett’s offer to change his not-guilty plea to guilty because of the “resources” it would save the government. Had Barrett gone to a jury trial, he could have gone up the river for five years if convicted on the single charge of interstate stalking, along with receiving three years probation and a $250,000 fine.
Under federal probationary guidelines, said Hsu, Barrett’s probably now looking at between 24 and 30 months behind bars, plus the fine. Manny Real, however, will literally be the judge of that when Barrett next appears in his courtroom.
Grossman said that while he and Andrews probably would not bother pressing civil charges against Barrett, they were looking at other options – to lobby for laws governing the transmission of hotel-guest information to strangers, and, possibly, to sue the hotels who blithely revealed to Barrett facts about Andrews’ whereabouts.
x
Looks like you're enjoying reading