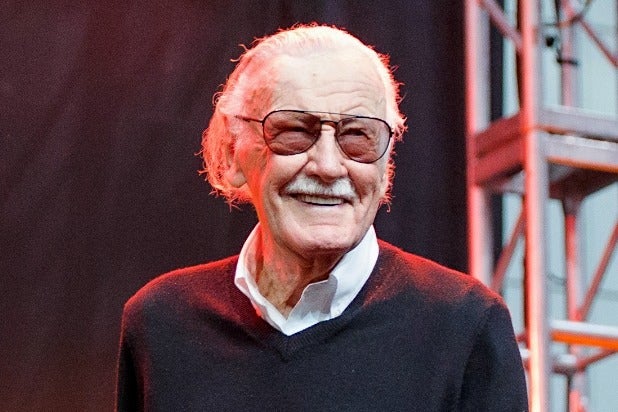 Hollywood is mourning Stan Lee, the legendary co-creator of the Marvel universe who died on Monday at 95.

Stars who have worked with Lee across film, TV and comics, regardless of role, paid their respects to the comic book legend.

“No one has had more of an impact on my career and everything we do at Marvel Studios than Stan Lee,” head of Marvel Studios Kevin Feige tweeted. “Stan leaves an extraordinary legacy that will outlive us all.”

“Original and genius are two very overused words in the world today, but Stan was both,” Sony Pictures Chairman Tom Rothman said in a statement. “Add irrepressible and irreplaceable, and you begin to describe the man. We have all lost a true superhero. We will greatly miss our friendly neighborhood Stan Lee.”

Marvel Comics and Walt Disney Studios also put out a statement confirming the news of Lee’s passing. “With a heavy heart, we share our deepest condolences with his daughter and brother, and we honor and remember the creator, voice and champion of Marvel,” the companies said in a statement.

“Stan Lee was as extraordinary as the characters he created,” Disney chairman Bob Iger added. “A super hero in his own right to Marvel fans around the world, Stan had the power to inspire, to entertain, and to connect. The scale of his imagination was only exceeded by the size of his heart.” Read Disney and Marvel’s full statement here.

Directors and stars of Marvel and DC projects alike, including Chris Evans, Josh Brolin, Scott Derrickson, Ryan Reynolds, James Wan and many more, tweeted or posted their support to Instagram with memories of Lee along with photos and one of his catch phrases, Excelsior, in remembrance.

“Thank you Stan Lee,” actress Jamie Lee Curtis tweeted. “For your service in protecting our freedom and for your creativity and imagination! You were and will always be a SUPER HERO!”

No one has had more of an impact on my career and everything we do at Marvel Studios than Stan Lee. Stan leaves an extraordinary legacy that will outlive us all. Our thoughts are with his daughter, his family, and his millions of fans. #ThankYouStan #Excelsior!

There will never be another Stan Lee. For decades he provided both young and old with adventure, escape, comfort, confidence, inspiration, strength, friendship and joy. He exuded love and kindness and will leave an indelible mark on so, so, so many lives. Excelsior!!

We’ve lost a creative genius. Stan Lee was a pioneering force in the superhero universe. I’m proud to have been a small part of his legacy and …. to have helped bring one of his characters to life. #StanLee #Wolverine pic.twitter.com/iOdefi7iYz

How many millions of us are indebted to this guy, none more so than me. The father of Marvel has made so many people so incredibly happy. What a life and what a thing to have achieved. Rest in peace Stan

Thank you Stan Lee for making people who feel different realize they are special.

Thank you for filling our childhoods with such joy. You will be dearly, dearly missed… pic.twitter.com/Qt2sZqaNlc

You were a man before your time… now it feels like you are gone before your time. RIP Stan the Man… thanks for the laughs and words of support. It’s a honor to live in your universe! #MarvelKnight pic.twitter.com/1TXdPqUB3x

His contribution to Pop Culture was revolutionary & cannot be overstated. He was everything you hoped he would be & MORE. I loved this man & will never stop missing him. They say you should never meet a childhood idol. They are wrong. #RIPStanTheMan pic.twitter.com/6OKH07ahJg

Farewell, my friend. You’re not only responsible for the boy I was, but also the man I am today. I will miss you all my days. Read it all here: https://t.co/3ni6SLKhWW pic.twitter.com/6naCfXP7HO

Awww man, heartbreaking. R.I.P. to a true pioneer and legend. My youth wouldn’t have been the same without him. So grateful to have met the guy, and told him how thankful I was for his work. #stanlee https://t.co/UiYscXKoLQ

Damn… RIP Stan. Thanks for everything. pic.twitter.com/TMAaDJSOhh

“With great power comes great responsibility.” RIP to the legend Stan Lee. I am so sad to hear about this. Never met the man but like millions I love his work. His characters brought joy to the world and inspired people to be the best version of themselves. Awful news. pic.twitter.com/8iTOKrEV57

Today we lost one of the greats. @therealstanlee, you were a inspiration and superhero to us all. Thank you for contributing so much- and giving us all something to aspire to! ???? #ripstanlee

Stan Lee and Dr. Seuss and Ray Bradbury. That’s where it begins and ends with me. To those of us who have been so deeply affected by the humanity of his imagination, the understanding of reaching beyond our potential and the necessity of tapping into our immeasurable imaginations, we thank you. Rest In Peace Dear Stan. You made our time here a better one. #ripstanlee @robliefeld

Iam so sad to hear that @therealstanlee has passed away! ???? He left his magnificent stamp on our show @bigbangtheory_cbs in so many ways and we are eternally grateful .. I adored his visits, hugs and fantastic stories . He was an epic superhero and I will never forget him!! #stanlee ???? excelsior!!

Today, we lost a real-life superhero. Stan Lee, thank you for everything. pic.twitter.com/zH6YIlslnx

Stan Lee
Thank you for bringing life to our heroes. You will be greatly missed. https://t.co/j5SmYunheq pic.twitter.com/XqkJ2ed8pr

Thank you Stan Lee. For your service in protecting our freedom and for your creativity and imagination! You were and will always be a SUPER HERO! pic.twitter.com/d1qpuImyzQ

Stan Lee, RIP. Thanks for inspiring so many of us to pick up a pen or pencil and put your dreams onto paper. Excelsior! pic.twitter.com/L33eTjUQdI

Rest in peace, Stan Lee. The many worlds of imagination & delight you created for humanity will last forever.

We lost a real-life superhero today. Stan Lee was a visionary, who elevated imaginations across the globe. I’m grateful for the time I got to spend with him. Rest peacefully, Stan. pic.twitter.com/Ie2S18y0A0

RIP to one of the greatest creative minds of our time. Thank you for such an incredible legacy and for giving us so many icons that will continue to live on long after you are gone. Goodbye #stanlee – we love you. pic.twitter.com/nxwI1YS3OT

RIP Stan Lee. Maybe you have twitter in heaven. Thank you for making my childhood, teen years and adulthood so fun, especially during darker days.

Mr @therealstanlee you inspired myself and the world through your amazing creations and limitless imagination! I am so honored and privileged to have had the opportunity to work with you a… https://t.co/a6y2URgTZw

Stan Lee. A gentleman and a genius. It was an honor to be a small part of his universe. Rest In Peace. pic.twitter.com/iZNtQRRqKD

Thank u Stan Lee for everything.

With Stan Lee, at The Hollywood Bowl in 2012. Rest In Peace Stan!

We met Stan when were were scrubs who snuck in to a party at comicon. He was as kind and encouraging then as he was when we met professionally years later. Thank you Stan for making us True Believers as kids and over and over again as adults.

What can I say about the loss of a visionary who created one of my favorite characters I've ever played? Stan Lee's fun-loving wit, charm, and poetic legacy will keep him alive for generations to come. My heart hurts, and he will be sorely missed.#StanLee #RIP @TheRealStanLee pic.twitter.com/EPST2GkNTu

Though you could say I let him down, Stan Lee kept in touch. Today we say goodbye to one of the greatest creative icons in history, someone who always reminded us his humanity was not a secret identity. Rest in peace, Stan. ❤ pic.twitter.com/ZreHPPMiZ3

Stan Lee created a universe where, if a character was beloved enough, they could never really die.

Thanks for so much of my life. You’ll never not be in it.

On what would have been the comics legend’s 97th birthday, The Wrap looks back at his sometimes forgettable — other times hilarious — onscreen appearances

Every time a new Marvel movie comes out, the one thing hardcore fans can count on is a special cameo from comic book legend Stan Lee. Some have been fun surprises, while others have been underwhelming. Here's the definitive list of every Stan Lee appearance through "Ant-Man and the Wasp" and "Venom," ranked from boring to excelsior!