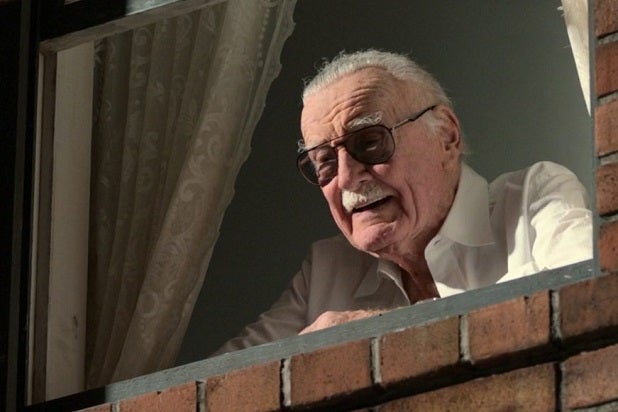 (WARNING: Contains spoilers for “Spider-Man: Into the Spider-Verse”)

“Spider-Man: Into the Spider-Verse” has a bittersweet moment for fans when the film hits theaters in December: one of Stan Lee’s final cameos, and the first since his death Nov. 12 at 95.

While Stan the Man never got to see the final cut of “Spider-Verse,” directors Bob Persichetti, Peter Ramsey and Rodney Rothman told TheWrap that he recorded his cameo over a year ago, and got to see how he would look in the film’s ambitious, hybrid style that blends 3-D animation with hand-drawn details and facial expressions.

The cameo comes as Miles Morales decides to follow in Peter Parker’s footsteps and take up the mantle of Spider-Man. But being just a teenager with a secret no one else knows, he can’t exactly get his hands on a Tony Stark-designed Spidey suit. So he goes to a costume shop and buys a cheap Spider-Man Halloween costume, complete with a string to tie up the back and a mask with eyeholes.

When he takes it to the counter, he asks the store owner, “What if it doesn’t fit?” The owner, of course, is Stan, who flashes his signature smile and assures Miles “It always fits…eventually.” And then points to a “No Returns” sign.

“After he recorded his lines, we designed his image, and that was something he was really happy about,” said Rothman. “Even though he didn’t see the final result, he knew what his role was going to be and he saw what he was going to look like in this version of Spider-Man’s world, and that’s something he really responded to.”

Also Read: 48 Movies With A+ CinemaScore Since 2000, From 'Remember the Titans' to 'Spider-Man: Into the Spider-Verse' (Photos)

For nearly 20 years, Stan Lee’s usually comedic, sometimes poignant cameos have been a staple of Marvel’s various non-comics productions. Beyond his appearances in nearly every Marvel live-action film since 2000’s “X-Men,” he has also appeared in the Disney films “Big Hero 6” and “Ralph Breaks the Internet,” the recently released Playstation 4 game “Spider-Man,” and he even crossed the Marvel/DC barrier for the first time to cameo in “Teen Titans Go! to the Movies.”