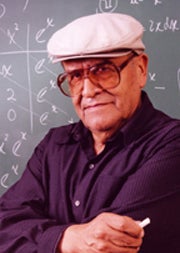 He was 79 and had been seeking treatment for bladder cancer at a Reno hospital.

Escalante immigrated to the United States from Bolivia in 1964, where he had taught biology and physics. Upon arriving in this country — speaking almost no English — he worked at a computer corporation and restaurant, while attending night school at Pasadena City College and California State University to get his teaching credentials.

In 1974, Escalante took a job at Garfield High School, which drew students from a particularly hard hit section of East L.A. He began teaching algebra, but by 1979 had moved on to teaching the AP calculus classes that would bring him national attention.

By 1981, he had such success in teaching his students the fundamentals of calculus that he drew the suspicion of the Educational Testing Service when 18 of his students passed the AP test, but made the same error on a question.

Twelve of the 14 students asked to retake the exam did and had their scores reinstated.

"Jamie exposed the most dangerous myth of our time — that inner city students can’t be expected to perform at the highest levels," Olmos said in a statement. "This is a legacy that changed American education."

In addition to "Stand and Deliver," Escalante was the subject of Washington Post reporter Jay Mathews’ 1988 book, "Escalante: The Best Teacher in America."

Despite administrative battles and the problems of teaching in a neighborhood dominated by gang violence, Escalante grew his math enrichment program to the point where it attracted nearly 400 students by 1990.

In 1991, following bureaucratic infighting, he and his teaching protege Ben Jimenez left Garfield and took another job teaching calculus in Sacramento. Garfield’s calculus program declined dramatically following his departure, with the number of students passing the AP exam falling by 80 percent a few years later.

Although he would serve as an eduction adviser to Arnold Schwarzenegger’s 2003 campaign for governor and would give public appearances from time to time, he largely shunned the spotlight. In 2001, he returned to Bolivia, where he taught part-time in a university in Cochabamba.

After Escalante became ill in 2008, Olmos and other actors from "Stand and Deliver" joined together to raise money for his cancer treatments.

Escalante is survived by his wife, two sons, and six grandchildren.