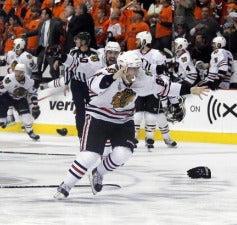 The Chicago Blackhawks won game 6 of their Stanley Cup Finals series Wednesday night against the Philadelphia Flyers. And the nail-biting overtime win not only gave Chicago its first hockey championship since 1961, it gave NBC the best overnight ratings for any Stanley Cup Final since the Flyers beat the Boston Bruins in 1974.

Even with ice hockey having its hottest night in 36 years, Fox still won the night in key adult demos, thanks to the performance of a two-hour "So You Think You Can Dance."

The Cup Is Up: Game 6 registered a 5.8 rating/12 share, up 41 percent from the 4.1/7 overnight for game 6 of last year’s Cup. Ratings peaked at 8.1/14 during the final 15 minutes of the game. The ratings spike likely was provoked by the presence of the Blackhawks, a large-market team with a dedicated fan base who suffered through nearly 50 years without a championship. In the Windy City, the game scored a 32.8/50 rating.

Dancing Over the Competition: "So You Think You Can Dance’ spiked 7 percent week to week, to a 3.0 rating/9 share in adults 18-49, leading Fox to the win for the night in the key demo.

Sad End for "Happy Town": ABC is airing the last five episodes of the thriller "Happy Town" this summer, after the show was pulled off the schedule in May. "Happy Town" demonstrated why it was canceled with a dismal performance Wednesday night. Aside from the Cup and "SYTYCD," "Happy Town" was the only original programming broadcast Wednesday, but it still posted the lowest numbers of the night drawing an anemic 0.8/2 in adults 18-49.