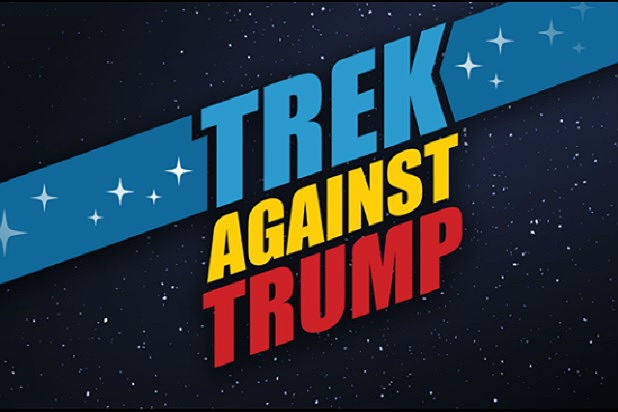 Donald Trump is no better than a Denebian slime devil in the eyes of a long list of “Star Trek” actors, producers and writers.

“Never has there been a presidential candidate who stands in such complete opposition to the ideals of the Star Trek universe as Donald Trump,” the group said in a statement on its Facebook page. “His election would take this country backward, perhaps disastrously.”

“We need to elect a president who will move this country forward into the kind of future we all dream of: where personal differences are understood and accepted, where science overrules superstition, where people work together instead of against each other,” the statement continued.

The statement goes on to discount the impact of third-party candidates, saying that in all likelihood either Trump or Hillary Clinton will occupy the White House. It then provides information on how to register to vote.

“Have you just turned 18? Have you moved? Have you never voted before?” it asks. “Some states have early registration (early October) and/or absentee ballots. You can’t vote if you are not registered. So make it so.”

Also Read: Donald Trump Says He Was 'Holding Back' on Hillary Clinton During Debate

Also Read: Did Donald Trump Admit to Not Paying Federal Taxes? 'I Never Said That'

Also Read: Merriam-Webster Dictionary Schools Donald Trump on Use of the Word 'Braggadocious'