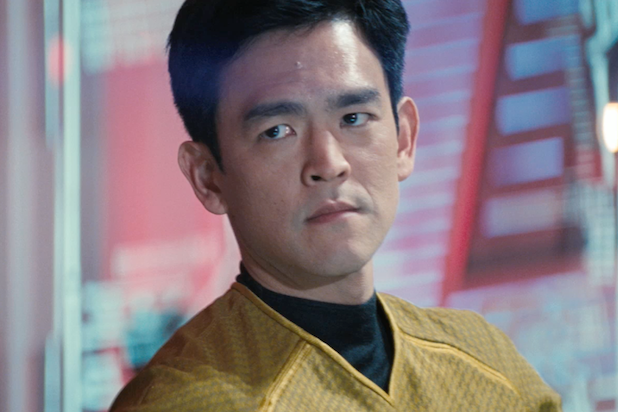 “Star Trek: Beyond” will confirm that longtime character Sulu has a same-sex partner, according to John Cho, the actor who plays him in the upcoming film.

In an interview with Herald Australia, Cho said that director Justin Lin and writer Simon Pegg made Sulu the franchise’s first LGBT character as an homage to George Takei, the first actor to play him. Takei has become well known in recent years for his Facebook page and his LGBT activism.

Past installments in the “Star Trek” canon have revealed little about Sulu’s personal life. The 1994 film “Star Trek Generations” introduced his daughter Demora, who followed in his footsteps and took over as helmsman of the Enterprise. However it was never revealed whether or not Sulu had a significant other.

Cho says that in “Beyond,” Sulu will be shown as both a loving husband and father, and in typical “Trek” fashion, it won’t be treated as a big deal.

“I liked the approach, which was not to make a big thing out it, which is where I hope we are going as a species, to not politicize one’s personal orientations,” he said.

“Star Trek: Beyond” will premiere during San Diego Comic-Con on July 20 at the Embarcadero Marina Park. The first ever outdoor IMAX screening will feature a cast and crew tribute to co-star Anton Yelchin, who was tragically killed in an accident last month. The film will release in theaters nationwide on July 22.