Captain Christopher Pike is being asked to resume his duties in the new teaser trailer for the Paramount+ series “Star Trek: Strange New Worlds.”

The new series is based on the years Capt. Pike helmed the U.S.S. Enterprise (pre-Capt. Kirk). It stars Anson Mount as Capt. Pike, Rebecca Romijn as Number One and Ethan Peck as Science Officer Spock. The show follows the three as they “explore new worlds around the galaxy,” per Paramount+ 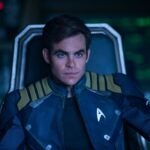 Akiva Goldsman wrote the premiere based on a story also by Goldsman with Alex Kurtzman and Jenny Lumet.

The series is produced by CBS Studios, Secret Hideout and Roddenberry Entertainment and will stream May 5 on Paramount+. The first season will span 10 episodes with new episodes dropping each Thursday.

Watch the teaser above.