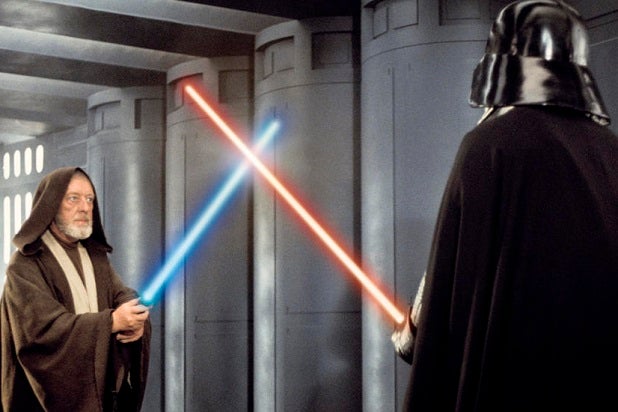 (Spoiler alert: Please do not read if you haven’t had a chance to see the original “Star Wars” movie in the nearly four decades since its release.)

Here’s something to roar about.

“Star Wars” actor Peter Mayhew, who plays Wookiee Chewbacca in the epic space opera, has revealed that the fate of Obi-Wan Kenobi was originally quite different in 1977’s “Star Wars: A New Hope.”

In a Twitter post this week, Mayhew revealed that Obi-Wan Kenobi, played by Alec Guinness in “A New Hope,” originally survived his light-saber fight with Darth Vader.

“#chewscript 027 Obi-wan lives through his fight with Vader. Check it out. @starwars,” Mayhew wrote.

The revelation was accompanied by a photo of a page from a draft “Star Wars” script.

The page reads, “Vader takes advantage of Ben’s [an alias of the Jedi Master] momentary distraction and brings his mighty Laser down on the old man. But Ben manages to deflect the blow, swiftly turning around, cutting a safety lock on the blast door.”

The script continues, “Vader is standing in the access tunnel, while Ben is in the huge hangar and the heavy blast door slams down between them, trapping Vader in the tunnel.”

Mayhew reprised his role as Han Solo’s furry, inarticulate cohort in the most recent “Star Wars” installment, “The Force Awakens,” released in December. Last month, Disney’s Bob Iger confirmed that the Chewbacca character will appear in the Han Solo standalone movie, due out in 2018.

Unless the script drastically changes between now and then, of course.

#chewscript 027 Obi-wan lives through his fight with Vader. Check it out. @starwarspic.twitter.com/Mrt7SaT3Qc